Would the Magic pick the seven-foot Cameroonian if he were available in the Draft? How would he fit alongside Nik Vučević? Tyler Lashbrook addresses those questions in today's Mailbag.

Hello there! Hope you're having a fantastic Sunday. It's NFL Playoff Sunday and I'm ready to sit back and enjoy some good ol' tossing of the pigskin. But for the time being, let's talk a little Magic hoops with another edition of the Orlando Pinstriped Post Mailbag. If you have any Orlando Magic questions for me or Evan Dunlap to answer, please send them to OPPMailbag@gmail.com or post them on the OPP Facebook page. We're always looking to field your questions.

With that said, let's get started.

Let's say Orlando is picking third in this year's draft. Andrew Wiggins and Jabari Parker are gone off the board. Orlando is obviously in the mindset to take the best player available over positional need. So, the question I pose to you is would the Magic consider taking Joel Embiid with their pick? Do you believe Orlando could possibly pair Embiid and Nikola Vučević together in a David Robinson/Tim Duncan- or Hakeem Olajuwon/Ralph Sampson-type duo? Would it work? 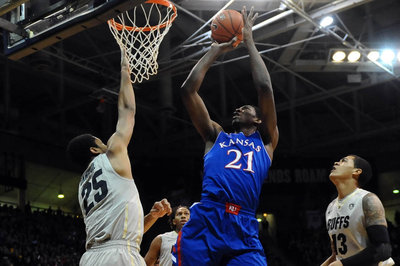 To your first question: Orlando would absolutely consider selecting Joel Embiid with the third pick if Wiggins and Parker are off the board. Sam Vecenie and I picked up our prospect series once again by releasing our lottery boards over at Fear the Sword and we both have Embiid at no. 3, right ahead of Julius Randle. I haven't looked around for a few weeks, but I can almost assure you that every other notable draft site has him high, too.

To expand this conversation: Sam and I went over the "Embiid or Randle" topic in our most recent mailbag. In short: I said the wrong team picking Randle could set itself back years because it takes a certain type of frontcourt player to pair him with. He needs a rim-protecting shot-maker, a rare breed of player. Vučević actually fits that mold pretty well, though his defense would still need to improve a ton to make that pair work, but Anthony Davis is probably the ideal fit alongside Randle.

Sam, on the other hand, said that the wrong team selecting Embiid could set itself back further. His reasoning? Randle is a 17-point and 10-rebound guy regardless and there's a better chance that Embiid is a high-lottery bust. Both of us, however, have Embiid in front of Randle because the 7-foot Cameroonian's ceiling is just so high. He has the type of raw potential that, if unlocked, could transform him into the league's best big man and one of the five best players in the NBA.

At 7-feet tall, Embiid has an incredible feel around the basket on offense and the sheer size and athleticism to destroy college opponents, despite not really knowing exactly where to be on his defensive rotations. On Saturday, he surprised most people by popping out and netting a shot from behind the arc. Moments later, he tried it again; this time, his shot was off the mark. What's telling, though, is that he does have a bit of range on that shot. I'm not sure it'll ever be a consistent thing, but it's nice to see him with that kind of feathery touch.

Can Vučević and Embiid work together long term? I'm not so sure.

That said, can Vučević and Embiid work together long term? I'm not so sure. Both have nice range on their jumper and both are fairly mobile for centers, but that's just exactly what they are: centers. I'm sure a Vučević/Embiid frontcourt could survive against certain lineups, but all it would take is for an athletic four to start cooking on offense to tear that bad boy apart on the defensive end.

The NBA is constantly evolving. When creative and intelligent minds create high-powered offenses, defenses are forced to adapt. Those defenses combat with tricks of their own to give that side of the ball the advantage and offenses respond with new tricks. Professional basketball is a constantly changing environment; right now, we're at the part of that evolution where small-ball lineups give teams a flexible alternative to traditional lineups.

And with team's using a man/zone hybrid--think a Tom Thibodeau-coached defense--the spacing in any lineup that features Vučević-Embiid would be extremely cramped, unless one or both can become nifty passers in the same mold as Marc Gasol and Zach Randolph. Even then, those Memphis Grizzlies lineups struggled with spacing and survived mostly by squeaking out the most of their offensive possessions and stifling teams on the other with a top-three defense. Would adding Embiid immediately morph Orlando into a top-three defense? Probably not. It's a good start, but not one that would reap immediate benefits on that end.

That doesn't mean that the Magic wouldn't take Embiid in this hypothetical. I'm all about picking the best player available and on my board, he's the best player available. Maybe that signals the end of Vučević or maybe the Magic develop Embiid then ship him off for more assets, though I think a developed Embiid has a much higher ceiling than Vučević. You never know: maybe future rule changes force basketball to go big, making a two-big man lineup more plausible. In that sense, Orlando would already be ahead of the curve with Vučević and Embiid, but I don't really see that happening barring drastic changes to the three-point line.