Magic at Nuggets: Previewing the game with Denver Stiffs

Share All sharing options for: Magic at Nuggets: Previewing the game with Denver Stiffs

In order to learn more about the Denver Nuggets prior to the Orlando Magic's game against them Saturday, we contacted Nate Timmons of Denver Stiffs. Nate manages that fantastic Nuggets community and is a great source for everything Denver Hoops. You can and should follow him on Twitter. With that said, here's our conversation:

Tyler Lashbrook, Orlando Pinstriped Post: Let's discuss the elephant in the room: a lot of Magic fans are keeping an eye on Denver because, as you know, Orlando will receive the worse of the Nuggets/New York Knicks pick. Over at OPP, this pick as been termed "WoNK." Denver lost eight in a row, but is back on another streak. This may be tough to answer, but how do you see this season playing out?

Q&A with OPP, Afflalo back in Denver 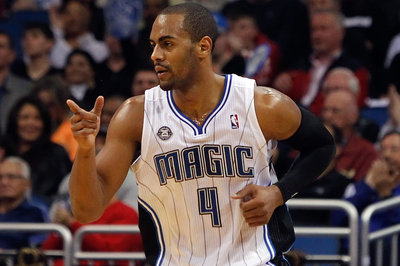 Nate Timmons, Denver Stiffs: There are a lot of Nuggets fans who are having buyer's remorse on that Orlando, Philadelphia, Denver trade. The Nuggets could really use Arron Afflalo and that first round pick back, but what's done is done. I thought at the beginning of the season that Denver would be in the hunt to win around 50 games or so, I don't know if they can get to that mark now, but I do expect them to be in the hunt for the playoffs the rest of the way. After speaking with Brian Shaw and some of the players, it appears they are back on the right track of blending a transition game with the half-court style that Shaw wants to bring to Denver. And at some point JaVale McGee and Danilo Gallinari will be back and I don't think it will be a bad thing to get those guys back in the rotation, especially Gallo - who was arguably the best player on that 57 win team last season.

OPP: Brian Shaw is a much heralded rookie head coach. From the Nuggets games I've watched, he seems to have a real grasp on which players can do what to help the team succeed. He seems interested in winning while developing, which is something I find rare. How would you say he's done thus far and how do Nuggets fans feel about him?

DS: Shaw has been going through some bumps and bruises as head coach. I would almost disagree with you on Shaw knowing which players bring what and say that he has been searching for the right combination of players and that his 10 to 12 man rotation, as of about a week ago, was a main problem in not only the eight game losing streak, but the reason the team had to have a team meeting and individual player meetings, as well. The rotation was a mess, Shaw was playing too many guys, and was pulling guys in and out of the lineup so often that players were having a difficult time finding any sort of rhythm. As my colleague Andrew Feinstein likes to say, NBA players are creatures of habit and the now 9-man rotation (well 10 if Wilson Chandler is still out) has helped give the players clearly defined roles. The guys on the outside looking in? Andre Miller (away from the team for "personal reasons"), Jordan Hamilton (who was in the rotation and now isn't), Anthony Randolph (who started some games to begin the year and played a role off the bench in some games), and Quincy Miller (who may start again if Chandler is out and is still developing).

You do bring up a good point in saying Shaw appears to want to develop while trying to win. He finally turned the backup shooting guard role to 21 year-old Evan Fournier and fans are excited to see what he can do with consistent time. Quincy Miller is also just 21 years-old and has seen some minutes here and there, he started against the Thunder in place of Chandler and, again, Nuggets fans are eager to see what he can bring with more minutes.

I have been impressed with how Shaw interacts with his players. George Karl was an old school guy that had special relationships with his players, but always liked to have a clear understanding that he was in charge. Shaw seems to have a real teacher/student relationship with his players and they all really like to challenge him to shooting contests after practice - especially three-point shooting contests. It has been fun to see the difference between Shaw and Karl and it'll be interesting to see how Shaw develops as a coach. I really like the way he interacts with his team and I also think his philosophies on the court are going to work well with the Nuggets. I love a defense that doesn't switch a lot or double team a lot and I like an offense that has a lot of ball movement and moving pieces. Winning makes things easier and fans were getting pretty impatient with Shaw during the eight game skid.

OPP: There was, at one time, a ton of rumors swirling around about Kenneth Faried's availability via trade. I'm a pretty big Faried fan. He has his deficiencies--and there are plenty of them--but he's just really a joy to watch. Do you think he's still on the trade block?

DS: Faried is a ton of fun to watch. There is nothing better than seeing a guy who just flat out outworks everyone. It's going to be interesting to see how much the Nuggets value Faried. Is he really worth a Derrick Favors like extension? That's four years and around $50 million ... that's a lot of money for a guy who isn't a great defender and can't play outside the paint on offense. Can the Nuggets afford a deal like that when they already have JaVale McGee making over $10 million per season along with Ty Lawson and Gallo? At some point the Nuggets need to make some roster moves and I think Faried could easily be part of some type of trade. We shall see.

OPP: We're probably at that point now where Ty Lawson is extremely underrated. I don't know that he'll make the All-Star game, with the West being so stacked at point guard, but he's really, really good at basketball. How good can he be? Is the sky the limit for him or are we at his basketball plateau?

DS: A lot of Lawson's game was/is built on his speed. He has worked his butt off on improving his three-point shooting and he continues to work on his mid-range game, his floaters, and his passing. One area where he's seeing some improved numbers is at the free throw line. Lawson's one of the most aggressive rim attackers in the game and he's finally getting some respect from the officials. I don't think he's driving more than he was last season, but his free throw attempts per game have gone from 4.3 to 6.3 (a career high). I don't know how much better Ty can get, but I do think we'll see some additional wrinkles added to the 26 year-old's game. Karl and Shaw both talked about how laid back Lawson is and Ty has talked about how he wants his teammates to see him working hard so they'll work hard, but he's not a very vocal leader. When he was a rookie and Chauncey Billups was around, nobody expected him to lead and Lawson talked about how it was hard to get guys to listen to a rookie point guard, but his teammates would listen now as he has proved to be one of the best guards in the game.

Lawson is also seeing a big minutes spike recently as Shaw has been playing him over 40 minutes a night. Ty really likes being on the floor more and the team plays incredibly well when he plays well. I've been impressed with his improved passing this season, too. He's getting really good at drawing defenders to him when he drives, waiting until the last possible second (in the air), and then dropping the ball off to his bigs for easy dunks. Lawson has been awesome this season.

OPP: The Nuggets have the right to switch picks with the Knicks this year. I'm not making that up am I? So theoretically Denver can win a championship and have the no. 1 pick this summer. They both seem unlikely, but it's still a thing. How in tune are Nuggets fans with the draft? Magic fans are, rightfully, obsessed with this thing. Do you have a favorite guy out there and why?

DS: Yep, the Nuggets will keep the better pick between their own and the Knicks, with the other going to Orlando. Our readers on Denver Stiffs are VERY much aware of this and people write me on Twitter often saying the Nuggets need to just tank so that they can be sure to get a top pick in this draft. I have to say I was really paying attention to college hoops at the start of the season, but now that the Knicks appear to be turning things around a bit and the Nuggets too, the draft watch for me is dying a bit. I'll pick it all back up as the season gets close to ending when things become more clear, but I'm no longer thinking Denver will get a lottery pick ... unless it's their own pick. I'm always fascinated with potential, so I think I'm most interested in Andrew Wiggins. Some of the stuff you see him do is just amazing, but then you hear folks say stuff like, 'Well, if he did that more often.' and it scares me a bit ... how big is his desire to be great? Being a Nuggets fan, they've never had higher than the third pick, so I'm not getting my hopes up. Like any draft, this one seems like a tough one to find the right guy. I'm keeping tabs on about six guys right now, but once I find out what pick Denver has I'll really start paying attention.

Thanks again to Nate for his time. We appreciate his invaluable input.