With the help of Zach Travis from Maize n Brew, we explore the former Wolverine and his chance to make the Magic's roster.

Share All sharing options for: 2013 Magic training camp: Get to know Manny Harris

Harris, a former Michigan Wolverine, averaged 17 points, 5.7 rebounds, and 3.7 assists in his three years in college. The Detroit native went undrafted in 2010, eventually signing with the Cleveland Cavaliers. After getting waived in 2012, the 24-year-old took his pro career overseas.

In order to learn more about Harris, I talked to Zach Travis (on Twitter: @zach_travis) from Maize n Brew, SB Nation's Michigan Wolverines blog. Below is a transcript of our e-mail conversation.

Tyler Lashbrook, Orlando Pinstriped Post: What does Manny Harris bring offensively? I remember him being an excellent scorer and an underrated passer at Michigan, but are there other things he can do?

Zach Travis, Maize n Brew: Manny Harris was a high-usage swingman at Michigan, and he was remarkably consistent through his career--that is both a good and bad thing. He dominated the ball as a player and was statistically Michigan's most used player in each of his three years. As a scorer, he was a solid if somewhat unspectacular shooter, hitting FTs at a greater than 80% clip in his career but never hitting more than one-third of his threes in a season. The nice thing about Harris was that he was able to help out in other areas as well. He was a solid rebounder in his career, and his assist rate was good for a wing. He was a bit of a jack of all trades at Michigan, and paired with DeShawn Sims, he gave the Wolverines one half of an effective one-two punch. 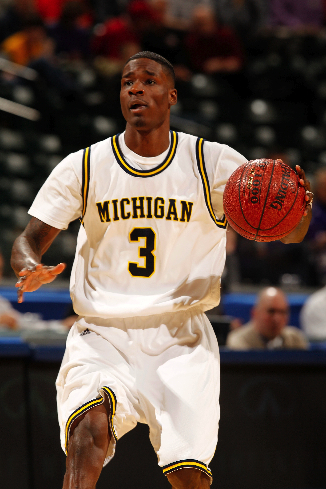 OPP: I always thought Harris would have become a productive NBA role player. Why do you think he's struggled to find footing in his career?

MnB: I think the reason that Harris never really took off in the NBA is the opposite of why he was successful in college. As a college player he was a NBA sized wing that could do a lot of things well. In the NBA his size and athleticism didn't set him apart anymore, and while he was good at a lot of things, he wasn't great at any of them. In the NBA you really need to have one or two things that you are really good at. Harris never had that one skill, and I think without it its hard to carve out a niche as a role player.

OPP: Orlando is a team void of point guards. Victor Oladipo will be getting some run at point behind veteran Jameer Nelson but not many people expect that to be a long term solution. Does Harris have the skill sets to play point guard in the NBA?

MnB: I don't think so. He never displayed it at Michigan, and unless he has done a good deal of work since leaving school I'd be surprised if he could handle the ball that much and facilitate at the level necessary. He is a solid passer and can get the ball to open players if the defense collapses on him, but his passing is more of a bonus and not a centralized part of his game.

OPP: If I recall correctly, Harris was fantastic as a freshman and sophomore but kind of seemed to stall out at Michigan. He never seemed to make that jump from good college basketball player to superstar like some people thought would happen. Is it possible that he's maxed out his potential?

MnB: Harris came in with the size and skill to immediately contribute at a high level, but he also walked into a team devoid of playmakers so his role was much larger than what it would have been. I think this didn't help him much in terms of development. The thing about Harris at Michigan was that even though he didn't make large strides, he generally improved in smaller increments as a passer, rebounder, and all around player, although his usage and shot% stayed almost exactly the same in his three years. It was disappointing that he never made the jump, but some players just aren't capable from going from really good to great. Harris seems like that kind of case--although he was very valuable to Michigan in his time there.

OPP: What are Harris' realistic chances of making a career in the NBA?

MnB: At this point I don't think his chances are very good. He is 24 and in NBA years as a marginal roster player he might as well be 60. Younger players will get more looks and unless he can finally distinguish himself with one or two valuable skills, he will probably end up with a solid career in Europe and minor league ball.

Big thanks to Zach for all of his help. You can check out his work at Maize n Brew.