What if the Orlando Magic traded for Andrew Bynum or Brook Lopez?

Tyler Lashbrook investigates alternative trade destinations for Dwight Howard. How would the Magic have fared if they'd acquired Brook Lopez or Andrew Bynum in return for the former top overall Draft pick?

Share All sharing options for: What if the Orlando Magic traded for Andrew Bynum or Brook Lopez?

Everyone does it. Everyone asks that two-word, two-syllable, simple question every once in a while. The one that opens a door of hopeful resolve. The question that creates chains upon chains of interconnecting thoughts. Of course, I'm talking about: what if?

For me, the What-If-Game is one I play with mostly with sports. "What if Brett Favre didn't throw across his body in the 2009 championship game?" "What if the Detroit Pistons had selected Carmelo Anthony instead of Darko Milicic?" "What if the Memphis Grizzlies had actually landed the no. 1 pick in 2003 and picked LeBron James, thus leaving the Cleveland Cavaliers with a choice between Darko, Dwyane Wade, Carmelo, and Chris Bosh?"

The Orlando Magic have created plenty of "what if?" scenarios in their 24-year tenure. What if the Magic had landed Tim Duncan in the early 2000s? What if Grant Hill had stayed healthy? What if Courtney Lee had finished the game winning layup/oop in Game 2 of the 2009 NBA Finals?

But I want to focus on something even a little more recent. What if Orlando traded Dwight Howard for a package centered around Andrew Bynum or Brook Lopez? Is it a little too soon to put a "what if?" to a trade that happened just over a year ago? Probably. But that's what makes this hypothetical situation all the more fun.

So, what if the Magic had taken a Bynum package from the Los Angeles Lakers for Howard?

Assuming Bynum's knee doesn't magically (sorry, had to) repair itself in Orlando, he wouldn't have played a minute there. The Magic would be reluctant to pay the big guy in the off-season and he bolts for Cleveland. In this scenario, the Magic essentially give Howard to the Lakers to rent for one year and play the 2012-13 season without Nikola Vucevic, Maurice Harkless, and Arron Afflalo. That's almost 35 percent of the team's total point production completely wiped out. Trading for Bynum could have left Orlando three paces behind where it is at now in the rebuilding process.

Orlando would have about $11 million off the books, theoretically rendering it a player in the 2013 free agency pool. But with a roster gutted of any talent, outside of Jameer Nelson, Glen Davis, Tobias Harris (the J.J. Redick/Harris and Howard trades being completely independent) and Victor Oladipo, I can't imagine Orlando spending a whole lot of money on long-term, guaranteed contracts. The timing just wouldn't be right. 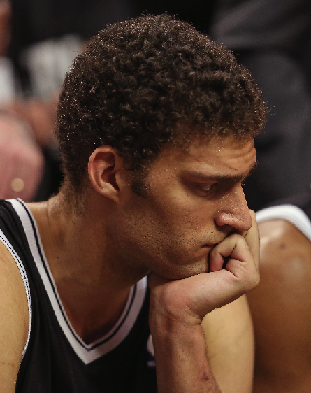 So, what if the Magic had taken a Lopez-centric trade from the Brooklyn Nets?

Adrian Wojnarowski of Yahoo Sports!reported the parameters of a three-team trade that would have sent Lopez, Damion James, Shelden Williams, Armon Johnson, Luke Walton, and three future first-round Draft picks. A healthy tandem of Nelson-Big Baby Davis-Lopez is probably just good enough to compete for a bottom-feeder playoff spot. It's also just good enough to not be guaranteed a top-four Draft pick. In this situation, I imagine Rob Hennigan and company throwing together a surprising deal to pick up two lottery picks, similar to what the Philadelphia 76ers did in the 2013 Draft.

Hindsight is a beautiful thing. Fans and media initially ridiculed Hennigan for what the he received in trading Howard. Over a year removed from the deal and it's becoming clearer and clearer that Orlando made the right trade and, in turn, "won" it. It may not have been as glossy at the time as fans had expected, but it put Orlando in a manageable rebuilding situation. What if things had been different?