The Magic still haven't found a young replacement for Jameer Nelson at point guard. When will they, and how? That's the foremost question in this edition of the OPP Mailbag.

It's time for another look inside the Orlando Pinstriped Post Mailbag to see what Orlando Magic questions you've got on the brain.

Please remember that Tyler Lashbrook and I are always taking your questions. Email them to OPPMailbag@gmail.com or post them on the OPP Facebook page.

With Jameer [Nelson]'s PG skills deminishing, Eric Bledsoe getting traded to the Suns, and really no cap space, what is the Magic's next move to improve the PG position?

In the short term, I think coach Jacque Vaughn and general manager Rob Hennigan are happy to experiment with Victor Oladipo at point guard. The second pick in the Draft played exclusively at that position in the Orlando Pro Summer League, and though his playmaking skills clearly need plenty of work, there's no question that he can at least break down defenses off the dribble when looking for his own shot. That's a valuable skill to have.

Longer term, it wouldn't surprise me to see [Rob] Hennigan try to acquire a point guard via trade or free agency.

Oladipo, though, is a natural shooting guard, and I believe he'll do his best work at the NBA level playing off the ball. The same is true for Doron Lamb and E'Twaun Moore, the Magic's other combo guards. Each can run some pick-and-roll, but neither has that innate table-setting ability that's a must for point guards in this league.

Longer term, it wouldn't surprise me to see Hennigan try to acquire a point guard via trade or free agency. Rajon Rondo will be a free agent in 2015, and the Magic, as yet, do not have much salary committed for that year; if Hennigan is interested, he should be able to make the four-time All-Star a competitive offer. Whether a 29-year-old Rondo would make sense for Orlando at that stage is an open question, but for now, it looks like a possibility.

Hennigan could also attempt to package some of his young assets for a more established point guard via trade, similar to how the New Orleans Pelicans acquired Jrue Holiday. New Orleans sent the Philadelphia 76ers the Draft rights to Nerlens Noel and a protected first-round Draft selection in exchange for the 23-year-old All-Star. It's clear that the Pelicans have a mandate from ownership to win now, and giving up a first-rounder in the 2014 Draft and one of the best prospects in the 2013 one for a player of Holiday's caliber wasn't exactly a popular move. But if Hennigan wants to accelerate the process a bit, he could look for a deal similar to that one, perhaps using Tobias Harris or Maurice Harkless as bait.

It's tough to forecast which young point guards might be available on the trade market, though it's safe to assume that Jeremy Lin of the Houston Rockets is one such player. You're right, though: Nelson is on the decline, and Orlando still doesn't have a young, viable backup to groom as his successor.

What do you think the chances are that the Nuggets and the Knicks both fall short of the playoffs?

This question is relevant because Orlando, in addition to having its own first-rounder in the loaded 2014 Draft, will also receive a first-round pick from either the Denver Nuggets or New York Knicks, whichever pick is worse. Orlando obtained this asset as part of the Dwight Howard trade in August 2012.

Can 'Melo do it again? 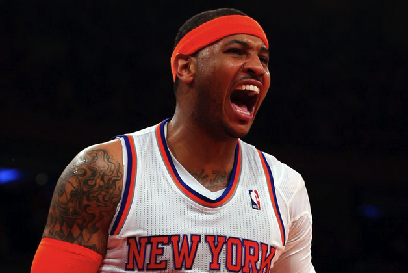 I don't think it's likely that both New York and Denver miss the playoffs. Denver is certainly hurting and isn't a lock to make the postseason: it lost Masai Ujiri, the NBA's reigning Executive of the Year and the architect of its surprisingly strong squad; George Karl, the reigning Coach of the Year whose hoops philosophy was uniquely suited to the roster Ujiri helped assemble; and Andre Iguodala, an All-Star forward who's a terror on defense and a veritable Swiss Army Knife on offense. Less notably, the team traded starting center Kosta Koufos to the Memphis Grizzlies for reserve power forward Darrel Arthur, ostensibly to open up more playing time for JaVale McGee.

Even with the additions of J.J. Hickson, Randy Foye, and coach Brian Shaw, Denver is poised for a step backward. But it can still compete for a playoff spot, even in the crowded West.

New York, however, is almost a cinch to make the playoffs in the East. Even acknowledging the fact that the Washington Wizards and Cleveland Cavaliers made great strides and are likely to escape the Draft Lottery, it's difficult to envision a scenario wherein New York slips to such an extent that it misses the postseason. There are questions about Carmelo Anthony's ability to duplicate his high-volume, high-efficiency scoring, as well as how Mike Woodson can get a frontcourt with Anthony, Amar'e Stoudemire, and Andrea Bargnani to compete defensively. But the East is a weak conference, and a team with 38 wins could conceivably crack the postseason there. The Knicks won 54 games in 2012/13, and while it's hard to argue that they improved, it's just as hard to argue that they'll be counting ping-pong balls in April.

Ultimately, I expect Orlando to receive New York's pick, which should be in the late teens or early 20s.

Will Fran Vázquez ever play for the Orlando Magic?

It really doesn't seem that way. The 30-year-old big man has one season left on his contract with Unicaja Málaga and has shown very little interest in ever playing in the NBA.

In the 2012/13 season, his first with Unicaja, Vázquez averaged 6.8 points, 4.5 rebounds, and 1.3 blocks per game on 59.7 percent shooting. There ought not be any questions about his talent level, but it's worth noting that he's only three months younger than Jason Maxiell. It's not unheard of for European stars to jump to the NBA later in their careers--just look at Pablo Prigioni, who signed with the Knicks at age 35--but I wouldn't bet on Vázquez doing something similar.

If the idea of Vázquez on the Magic intrigues you and you're into videogaming you might be in luck: Unicaja is one of 14 international teams which 2K Sports has put in NBA 2K14, so you might be able to add Vázquez to the Magic that way. It's not real life, but it's better than nothing, I suppose.