We're all over the place on the latest Mailbag.

How's everyone doing today? It's Friday and the Orlando Pinstriped Post Mailbag questions are rolling in. We're touching on a lot of different topics today so hop on and enjoy the ride. Got a question about the Orlando Magic? You can e-mail it to OPPMailbag@gmail.com or you can send us one on the OPP Facebook page.

It's hard to judge a coach when he is not expected to win a set amount of games. So next season, what should we be looking at to decide if [Jacque] Vaughn is doing a good job or not?

I imagine Orlando management will keep a close eye on how Vaughn manages games as a whole. In-game decisions are important. The Magic players want to win. They're going to fight to win because players are, simply, competitive. Is Vaughn putting his players in the position to win? The Magic might not win because the talent just isn't there to compete against every team on a day-to-day basis but is Vaughn making the right substitutions? Is he making the right defensive adjustments? Is he calling timeouts at the right times? These are the in-game things that we judge coaches on.

No guarantees Brown will last in Philly 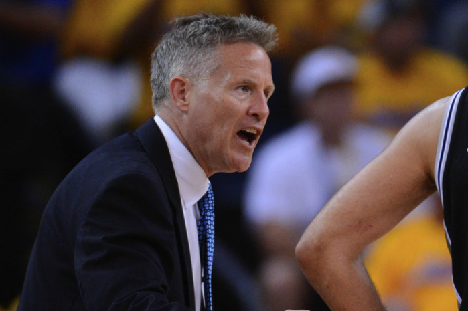 Here are two cases of rebuilding teams, whose coaches are (were) viewed through very different lenses: Monty Williams with the New Orleans Pelicans and Byron Scott with the Cleveland Cavaliers. Fans criticized Scott for his mismanaging of games. Kyrie Irving practically stalled out on defense and that's something that concerned Cleveland management. Williams, on the other hand, has squeezed the most out of every player, sans Al-Farouq Aminu, on the Pelicans' roster. His work in New Orleans landed him a spot on the USA Basketball staff as an assistant under Mike Krzyzewski.

Will Tobias Harris improve as a defender? How will he develop on offense? Will Maurice Harkless find himself in positions to succeed on the offensive end? How will Victor Oladipo develop as a ballhandler and playmaker? Will everyone on the team have a defined role that he plays to on a night-in and night-out basis? Will the team move together on a string defensively rather than scatter into individual chaos? These are things outside of game managing that will be looked at under a microscope.

If the team competes every night and the young guys develop on an arc that you'd like to see at this point in their careers, then Vaughn, in my opinion, has done his job. If the team falls apart and the young guys regress or stall out, then there will probably be questions of Vaughn's future. Remember: coaches improve the same way players do. They get better with experience. If Vaughn improves in his second season as a head coach then Orlando management will probably be happy.

What player in the NCAA do you think you will be watching closely this year? Be it for the Magic or for your own personal reasons.

Julius Randle. Call me crazy but it wouldn't surprise me if Randle made a case for the top pick in the 2014 Draft. The dude dribbles like a guard, shoots like a wing, and posts up like a 6-foot-9 Shaquille O'Neal with a little more flair. He's an intense competitor and fierce leader, by all accounts. He's leading Kentucky and one of the most talented recruiting classes of all time. It also helps me that I live in Kentucky; I can watch every minute he's on the floor this year. I'm sure you'll see a lot of Randle updates from me throughout the season.

Another guy I'm interested in, that doesn't have a lot of hype yet, is Semaj Christon from Xavier. The 6-foot-3 sophomore-to-be is a long, athletic point guard with a smooth handle and the creativity to set up his teammates. His jump shot is shaky and he's hesitant to pull from range -- shooting just 0.9 threes per game -- but he has the potential to be a Top 15 prospect in 2014. Compare his numbers to Marcus Smart's and you'll find yourself wondering how much better Smart is than his Xavier counterpart.

That's why I'm so interested in how Christon improves in his sophomore season. If he improves that free-throw percentage and develops a semblance of a jumper, he'll be a real nice prospect.

Aesthetically, yes, it makes more sense to trade Davis. That's because the Magic are loaded with power young power forwards in Harris, Andrew Nicholson and possibly Romero Osby. There's also newly acquired veteran Jason Maxiell, who will get role-player-type minutes. The team, as of now, is really crowded at power forward.

But Davis hasn't logged a minute since January 30th because of injury and it's unclear how much return the Magic could expect from the big man. Afflalo, however, put together one of his best years because of an increased role. He proved to be a capable scoring option without just being a spot-up shooter. Afflalo could bring a lot more value back for Orlando.

Right now it doesn't look like the Magic are in any hurry to trade either of their two veteran core pieces. I can picture Orlando shipping out one, maybe both, around the trade deadline, but right now I expect that they'll both be in Magic uniforms until at least February.

Excluding Oladipo, who is the one rookie you are most looking forward to seeing in the NBA next season?

I couldn't decide on one guy, so here are three I'm looking forward to watching:

I've got a weird feeling that we're going to look back in five years and say "How did Schröder fall all the way to 17? In that Draft?"

Welcome to 2013 wherein we have nano-coated technology that repels every liquid, a hovering golf cart, and a five-minute video of unconverted Dennis Schröder assists in the Summer League.

I've got a weird feeling that we're going to look back in five years and say "How did Schröder fall all the way to 17? In that Draft?" I understand that Summer League isn't a measuring stick for a player's career. I get that. I look at the Summer League like this: you find out who can't play rather than who can. But wow, Schröder successfully made the Hawks a season-long #LeaguePassAlert.

Jeff Teague is still with the Atlanta Hawks and is obviously the starter, but it looks like Schröder will be his full-time back up, and that's pretty exciting. It may have been more exciting if Schröder went somewhere like Philly where he could start right away, but learning behind the veteran Teague is probably the better career path.

The Portland Trail Blazers' backcourt rotation of Damian Lillard, Wesley Matthews, C.J. McCollum, and Mo Williams is going to be a lot of fun to watch and is going to drain threes on NBA 2K14. I'm most intrigued by the Lillard/McCollum pairing that Portland is surely going to experiment with. Lillard and McCollum in the back court is going to be awful on defense but it should be a lot of fun on the other end. Both can shoot; both can run pick-and-rolls; both are products of small colleges; both are smart, crafty offensive players; and now they're on the same team? I'm with it.

Those are all questions that I have for Bennett. And that's not even considering that he ballooned to 261 pounds after surgery. Will Can he play defense?

Bennett had a lot of questions surrounding him going into the draft, now that he's a no. 1 pick -- following Irving and LeBron James -- there's even more intrigue. There will be more eyes on Bennett now. Cleveland, health in its favor, projects to be a playoff team in the East. How will Bennett hold up in his rookie season and moving forward? I want to see how this plays out.

Thanks for reading and have a fun, safe weekend everyone. Remember: Evan and I are always looking to answer your questions. You can e-mail us at OPPMailbag@gmail.com or post a question on the OPP Facebook page.