The Magic played their sloppiest game of the week on Tuesday and fell to 1-2.

The Orlando Magic dipped to 1-2 in Orlando Pro Summer League action on Tuesday, falling to the Miami Heat, 94-80, in a sloppy and lackluster effort. First-round Draft choice Victor Oladipo played an aggressive and mostly effective floor game, but he had precious little help from his teammates. He finished with 22 points on 4-of-7 shooting from the field and 12-of-14 from the foul line, five rebounds, two assists, and five turnovers. Romero Osby added 11 points and three rebounds.

The Magic became the first team of the week to get no standings points in a game. Miami won all four quarter and captured seven points in the standings.

A pick-and-roll between Oladipo and Kyle O'Quinn on the Magic's first possession created an easy three-point look for Doron Lamb in the left corner, which chance the Kentucky product converted. As Miami sent a soft trap at Oladipo, the rookie guard fed O'Quinn with a bounce pass at the top of the pick. O'Quinn recognized that the defense had ignored Lamb in the corner and swung the ball to him.

Orlando's next trip was equally impressive as the Magic worked to isolate Maurice Harkless against rookie swingman James Ennis in the pinch post. Harkless, who is not accustomed to playing with his back to the basket, demonstrated great patience as he dribbled to the middle, and then shook Ennis with a drop step toward the baseline. Harkless then elevated for a one-handed jam before Miami's defense could rotate.

A few possessions later, Orlando ran a downscreen for Harkless which bled into a screen-and-roll between him and O'Quinn. Harkless took two hard dribbles to his right and elevated to the rim, drawing a foul.

A physically stronger and more assertive Harkless could be a bigger presence in Orlando's offense in the regular season.

For Magic's core, "this is their time to play" 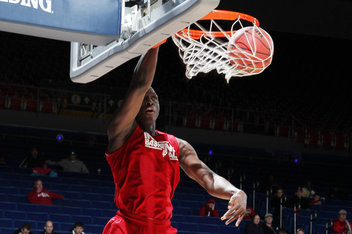 In deference to giving heavy minutes to their core players, the Magic's non-roster invitees to Orlando Pro Summer League haven't seen much action.

O'Quinn picked up his third foul with 1:33 to play in the second quarter, giving way to free-agent pickup Shane Lawal, who last played in Italy. Lawal did not play in the first two days of Orlando Pro Summer League action. Matt Gatens and Glen Dandridge were the other Magic players to make their summer debuts for the team in the first half of Tuesday's game. UCF product Keith Clanton became the last of Orlando's summer-leaguers to check in when he debuted in the second half.

The early strong signs from Orlando's offense proved to be an outlier; the Magic were disorganized and not sharp, leading to 15 first-half turnovers to just nine made field goals. The Heat's NBA club is noted for its aggressive defensive style, and while that approach was a factor against Orlando today--especially against Oladipo, who is still negotiating how to play point guard--some of it was just poor play on Orlando's part. The Magic committed three traveling violations in the first half, for example.

Orlando opened the second half on an inauspicious note as Andrew Nicholson was whistled for an offensive foul after he lowered his shoulder into Eric Griffin. The turnover was his fifth of the game, a figure which Oladipo matched on his next possession as he dribbled the ball off his knee against defensive pressure.

The Magic took a break from committing silly turnovers long enough to run some give-and-go action with O'Quinn as a facilitator. The first play, with Oladipo, resulted in a spectacular Jarvis Varnado block of Oladipo's dunk attempt, but referee Marat Kogut called Varnado for a foul; during a break in play later in the game, a member of Miami's coaching staff politely asked Kogut if he should not have called the foul. "Probably," was Kogut's reply.

The next give-and-go led to a driving layup by Lamb, who had to go under the basket from left to right to complete the play. It wasn't a shot that Lamb would have completed a year ago, but his improved strength and body control aided him here.

Miami stayed in control of the game, however, pushing its lead to 14 points on the second of consecutive dunks by Griffin. Lamb would leave the game moments later after banging his left knee with a Heat player. Accompanied by Magic trainer Keon Weise, Lamb walked off the floor under his own power, but was unable to put much weight on his left leg. Rodney McGruder replaced him in Orlando's lineup.

The Magic played more under control offensively the rest of the way, with the sloppy turnovers diminishing in frequency. And yet Miami was able to execute its half-court offense to create easy scores anyway; it didn't need the Magic's turnovers to fuel scores, as it turned out.

A jump hook by Varnado was the third quarter expired put Miami up by 13 points, giving it a narrow, one-point win in the quarter. That basket could have ramifications for Championship Day seeding, especially if Orlando finishes one point out of a more favorable seed.

The Magic tried to close the gap in the early moments of the fourth, but soon pulled their roster players--Oladipo was their last, at the 5:34 mark, and Osby exited with 3:24 to go--and closed with a fivesome with no likely NBA player among it.