A screw inserted in Davis' left foot after he broke a bone in January came loose, necessitating another procedure.

The Orlando Magic announced Monday that Glen Davis underwent a surgical procedure to replace a screw in his left foot. Doctors had inserted the screw in February after Davis broke his fifth metatarsal in a loss to the New York Knicks.

According to the Magic, Davis "is expected to resume basketball-related activity later this summer." Orlando's training camp begins October 1st at Amway Center. 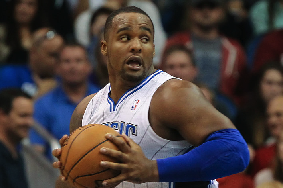 The veteran power forward embraced, perhaps too much, being a go-to offensive option.

John Hamilton, Davis' agent, spoke to Josh Robbins of the Orlando Sentinel regarding the injury.

"He's just been having some discomfort," Hamilton said, according to Robbins. "It made sense for us to get it checked, and that’s what we did."

Davis, 27, averaged 15.1 points and 7.2 rebounds per game in his second full season with the Magic, and his first as a regular starter. He served as a team co-captain and as the anchor of Orlando's defense. He is due $13 million over the next two seasons, according to ShamSports.