The Jazz agreed Friday to accept roughly $24 million in salary, along with two future first-round Draft picks, from Golden State so it could create the cap space necessary to ink Andre Iguodala. Why couldn't the Magic have made the same trade?

Share All sharing options for: Orlando Pinstriped Post Mailbag no. 6: Why the Magic couldn't help the Warriors dump salary

Before we begin, a reminder that Tyler Lashbrook and I are always taking your questions. Email them to OPPMailbag@gmail.com or post them on the OPP Facebook page.

Could the Magic have gotten the 2 picks the Jazz picked up for Golden State's expirings? If so, why didn't they do that deal?

Let's recap the proposed trade, which Utah and Golden State cannot complete until July 10th, at the earliest, due to the NBA's moratorium period.

The Warriors will send the expiring contracts of Richard Jefferson, Andris Biedriņš, and Brandon Rush to the Jazz in exchange for the expiring, minimum-salary contract of Kevin Murphy. For agreeing to take on all that dead money, the Jazz will receive the Warriors' first-round Draft picks in 2014 and 2017, as well as "multiple" second-round Draft picks in as-yet-unreported years. 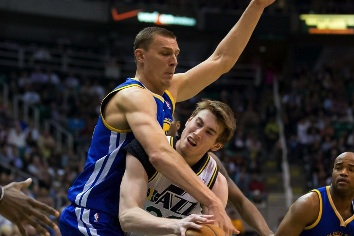 Golden State's incentive for clearing all that money: it wanted that space in order to sign All-Star swingman Andre Iguodala to a four-year, $48 million contract, which he will do once the moratorium ends.

Magic fans, like cw2.pieper above, are wondering why general manager Rob Hennigan couldn't have made that deal for his club. As a result of August's trade of Dwight Howard, Orlando has a trade exception worth almost $18 million, by far the largest such exception in the league, , according to ShamSports. Couldn't the Magic have taken on the Warriors' bad money and get those future Draft picks to add to their war chest?

The contracts of Biedriņš, Jefferson, and Rush are worth just over $24 million, per ShamSports. As I explained previously, Orlando does not have any salary-cap space; if it is to take on contracts, it will have to do so by using the Howard trade exception. And even the NBA's largest trade exception isn't big enough to absorb all three of those contracts.

Utah, in contrast, will have enough cap space once the moratorium ends to absorb those contracts outright. Not counting cap holds for unfilled roster spots or the salaries for their rookies, the Jazz have only $27 million in guaranteed money for the 2013/14 season, according to ShamSports. Assuming a salary cap of $58.5 million, Utah can take on the Dubs' trio of bad deals and still have about $7 million in space left over.

It's true that Orlando could have offered to take on Rush and either Jefferson or Biedriņš and have exacted some compensation from Golden State for doing so. But Utah was a more reasonable trading parter for the Warriors because it could take on all three deals, eliminating the need to make at least two separate trades involving the three bad contracts.

There's still a chance the Magic could make a trade similar to the one Utah made, as Orlando has both the trade exception and, in Kyle O'Quinn, a minimum-salary player to send in return. Recall that NBA trades must involve assets changing hands; Utah couldn't have taken the Warriors' bad deals for nothing, and so had to send something back to the Bay. It could have been the Draft rights to a player or a future Draft pick, but the Jazz settled on Murphy.

The Howard trade exception expires on August 10th. If the Magic don't use it by then, or if they renounce it entirely, its amount will come off the Magic's cap.