What sort of contracts will the Magic's young players get when their rookie deals expire? We tackle that question and more in the latest OPP mailbag.

In this edition of the Orlando Pinstriped Post Mailbag, we'll talk about the paydays that some of the Magic's young players might get in a few years, Jameer Nelson's future with the team, and some trade options.

Remember that you can submit to OPPMailbag@gmail.com your questions for me or Tyler Lashbrook to answer. We don't have a set schedule to run these features, so we'll post them as the questions roll in. Put another way, we are always taking your questions. We want to hear from you.

Assuming that [Nikola] Vučević, [Maurice] Harkless, [Tobias] Harris, and [Victor] Oladipo all turn into big contract players, which of these guys do you see us keeping long term, and which ones do you think we will try to flip for more young assets/picks? Or even us packaging to try to bring in a veteran superstar?

This question is pretty tough, because we haven't yet seen how the new Collective Bargaining Agreement will affect the values of players currently on their rookie contracts, but I'll give it my level best here.

Of the players you mentioned, the two who are most likely to pull in big contracts, ones which pay at least $10 million annually, are Tobias Harris and Nikola Vučević. Harris can really stuff a stat sheet--he posted 17.3 points, 8.5 rebounds, 2.1 assists, and 2.3 combined blocks and steals in his half-season with Orlando--which is why I think he'll get the biggest deal. He's versatile and, by the time he gets his first post-rookie deal, will be only 23.

If [Vučević] becomes a more well-rounded player [...] he could net a maximum-salary offer.

Vučević gets good numbers too, as he ranked second in the league in rebounding behind only Dwight Howard. And that was just in his second season. If he becomes a more well-rounded player by becoming more of an offensive force and by improving as a defensive presence, he could net a maximum-salary offer. I think it's more likely, however, that he'll get something in the $10-$12 million range: below the max, but still a substantial contract.

Victor Oladipo and Maurice Harkless are harder to peg, in contrast, because their stock-in-trade is defense. Tom Ziller, an SB Nation colleague, has done great work here and here on how defensive players are paid at a discount relative to offensive players. And because there's more to defense than raw counting stats like blocks and steals, it's really difficult to gauge what defensive-oriented players are worth.

What further complicates Oladipo's case in particular is that, as a number-two overall Draft pick, he'll already be making a lot of money on his rookie deal. The qualifying offer for such a high pick will be above the mid-level range; if Oladipo is only a marginal offensive talent in his first four NBA seasons, would he accept a paycut on his second contract, if that's what the market demanded?

Ultimately, I don't think that all four of those players will be with the Magic when they sign their first non-rookie deals. If I had to guess--and I emphasize that it's only a guess--I think that the team would consider flipping Harris or Harkless in a trade for a "veteran superstar," to use your terminology.

How many productive (however you define that term) years does Jameer Nelson have left? Will he retire as a member of the Magic?

I think it's fair to call Nelson's most recent season "productive," because he did post per-game highs in minutes and assists, but he's certainly on the decline. Going forward, it'd be in the Magic's best interest to scale back the 31-year-old to about 28 minutes per game in order to prolong his career and to get the most out of him as he continues into his 30s; Nelson averaged 35.5 minutes per game in 2012/13. 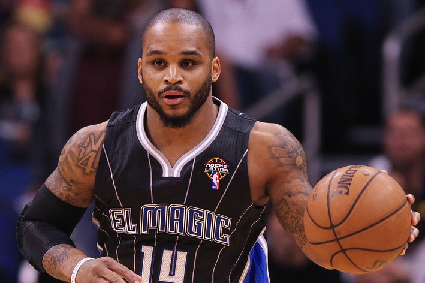 I do think there's a good chance that he'll spend his entire career with the Magic. He is on the books for $8 million in 2013/14, according to ShamSports, and only $2 million of his $8 million salary for the following season is fully guaranteed. Orlando could waive him before that guarantee date and re-sign him to a cheaper deal, if it so chooses, or it could proceed to let him play that year at the full salary and re-evaluate where it stands in the following summer.

I like Nelson's presence on this rebuilding squad. Not only does he serve as a leader for the players, but he has eased Jacque Vaughn's transition into coaching. He's no worse than a league-average point guard, but he also brings some of those intangibles that not every player has.

However, should Nelson ever decide that he doesn't want to spend his middle-30s on a rebuilding team, then I would hope that he front office would accommodate him with a trade or by granting him his release.

How big is the possibility that the Magic do some interesting trades? Do you think the Magic have a chance to acquire Jan Veselý or Brandon Knight?

It depends on what your definition of "interesting" is. The Magic aren't at a point in their rebuilding where it would be prudent for them to take on big, long-term money--a topic I covered in Tuesday's mailbag regarding Rajon Rondo--but if there's an opportunity to pick up young talent cheaply, then it'd be something for Orlando to consider.

I don't understand the interest in Veselý at all; he is pretty clearly not an NBA player, given that he has, in two seasons, tallied more fouls than field goals. He's a terrific athlete, sure, but he doesn't have any one basketball skill that warrants putting him on the floor. Even if the Magic were willing to trade a future second-round pick to get him--and that's assuming that Veselý is even worth that low price--where would he even play? The Magic have a glut of forwards who are younger and already more polished.

Knight is a more interesting prospect, but not by much. There's no indication that he can run an offense, which means his best position is at shooting guard, where he's seriously undersized and overmatched on defense. If your hope is to acquire Knight as a potential successor to Nelson at point guard, I think you'd be disappointed.

I also get the sense that the Pistons aren't ready to give up on Knight, although they did pick a similar player, Kentavious Caldwell-Pope, in the Draft on Thursday. I think Joe Dumars sees Knight as part of his young core, and the hiring of former NBA player Maurice Cheeks, who's well respected as a mentor, particularly to young guards, signals that Detroit is invested in Knight's development.

Thanks for reading and for your submissions. Please submit your questions to OPPMailbag@gmail.com. Again, we are always taking questions. We'd love to do several of these posts per week, but we can't do it without you.