The Indiana product figures to contribute right away at the NBA level.

At the NBA analytics site Hickory-High, author Cole Patty attempted to project the performances of the NBA's rookie class of 2013, and he found that Victor Oladipo figures to be a favorite for Rookie of the Year honors based on his ability to contribute right away. The Orlando Magic guard projects to have the best Regularized Adjusted Plus-Minus, or RAPM, of any rookie, with a 0.5 mark, which bests Philadelphia 76ers center Nerlens Noel's 0.2 rating.

Joe Sill gave a talk about RAPM at the 2010 Sloan Sports Analytics Conference, but it was not recorded. However, an abstract of the talk indicates that RAPM "doubles [the] accuracy" of "conventional" plus-minus, which does "a poor job of predicting the outcome of future games." 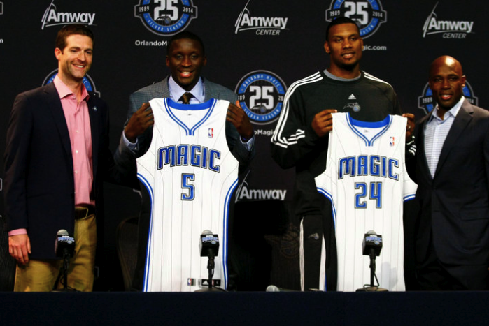 Oladipo's star shone brightly in the Orlando Pro Summer League. Orlando Pinstriped Post breaks down his performance, as well as those of Orlando's other Summer players.

One week after the Draft, one Vegas sportsbook set Oladipo's Rookie of the Year odds at 11-to-2, rating them behind only those of Utah Jazz point guard Trey Burke, who has 4-to-1 odds.

Oladipo went on to earn All-Summer League First Team honors for his performance in the Orlando Pro Summer League, in which he averaged 19 points, 4.3 rebounds, and five assists per game playing exclusively at point guard.