When will the Magic sign their second-round Draft choice? We delve into that topic and two others in this Monday edition of the Orlando Pinstriped Post Mailbag.

Let us reach once more into the Orlando Pinstriped Post Mailbag to see what Orlando Magic topics have piqued your interest.

A reminder before we get underway: Tyler Lashbrook and I are always taking your questions. Email them to OPPMailbag@gmail.com or post them on the OPP Facebook page.

Why haven't the Magic signed Romero Osby yet?

I can't speak to the specifics of Osby's case, but in general, there is less urgency to sign second-round Draft choices. They aren't bound to a scale salary, like first-rounders are, which helps to explain why the Magic have already signed Victor Oladipo. And because most second-rounders sign for the league's minimum salary, they can be signed at any time, regardless of the salary cap.

On average, 2012's second-rounders didn't sign until August 4th, and the median date was July 25th. Further, none of the 11 players picked after Osby in 2013 has signed yet. In short, there's nothing unusual or at all out of the ordinary about the fact that Osby hasn't signed.

Osby will certainly come to training camp with the Magic, but camp doesn't begin until October 1st. I'm sure Orlando will ink him well in advance of that date.

I was wondering if you believe that Jason Maxiell will take up the majority of backup minutes away from [O'Quinn] at the center position? [...] [A]s we all know [Maxiell] is more than capable at the Center, and would warrant some time there considering the amount of PFs we currently hold.

Yes, I expect Maxiell to get some minutes at center behind Nik Vučević. Those same minutes went to O'Quinn down the stretch of the 2012/13 season. 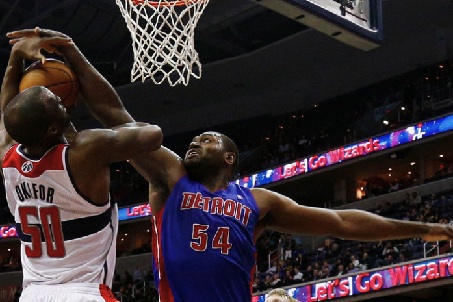 I understand Magic fans' resistance to any transaction that might result in fewer minutes for O'Quinn and the rest of Orlando's under-25 players. But Maxiell is more than simply a body or a locker-room tutor: he's an excellent low-post defender, capable of defending centers despite his height, which the NBA lists as 6-foot-7 but which I understand to be generous. He's also coming off a season in which he blocked 1.3 shots per game, and he joins an Orlando team which blocked fewer shots than all but five clubs in 2012/13.

None of this is meant to suggest that Jacque Vaughn will relegate O'Quinn to the end of the bench. There's always a chance that O'Quinn will work his way into the playing rotation, just as he had to do as a rookie. But at this stage of the offseason, it's tough to envision Maxiell playing behind O'Quinn.

In an alternate universe, the NBA resolved the Sacramento/Seattle dilemma by granting Seattle an expansion team right now. In a typical "protect 8" expansion draft, who do the Magic protect? Which current player ends up moving to Seattle?

First, allow me to reiterate my support for an expansion team in Seattle. It's a viable NBA market with devoted fans who would support a team. There's no legitimate reason for the NBA not to expand; spare me the arguments about talent dilution and having an odd number of teams. They don't sway me in the slightest.

Having said that, I participated in an exercise like this one for Sactown Royalty, SB Nation's blog about the Sacramento Kings, in January. Which unprotected Magic player slipped away to the fictional Sonics? Find out here.

Let's update the question, however, and protect eight Magic players. Let's assume that the expansion SuperSonics will begin play in the 2014/15 season, meaning the Magic can only protect players who are either under contract for that season or who will be restricted free agents.

Based on those criteria, Orlando has 12 players eligible for the expansion Draft. Were I in charge of making the team's personnel decisions--and I suspect there are a great many readers of this site who are grateful that I am not--I would protect Jameer Nelson, Arron Afflalo, Oladipo, Maurice Harkless, Vučević, Tobias Harris, Andrew Nicholson, and O'Quinn.

The Magic players in the expansion draft pool would be Glen Davis, Al Harrington, Maxiell, and Doron Lamb. Seattle can only pick one player, at most, from each team. The Magic's two most attractive unprotected pieces are Davis and Lamb, but there's no telling if they'd appeal to Seattle.

I chose to protect Afflalo instead of Lamb because, despite Lamb's youth and relative upside, Afflalo is a better player who also has more trade value. And, because his salary far exceeds Lamb's, he could net more in a potential trade.