Bledsoe, long rumored to be a target of the Magic, will head to Phoenix as part of a three-team trade once the NBA lifts its moratorium on player movement.

Share All sharing options for: Eric Bledsoe trade: Clippers to send young point guard to Phoenix in three-team deal, according to report

One of the Orlando Magic's rumored trade targets is on the move, and he's not headed to the City Beautiful. As Adrian Wojnarowski of Yahoo! Sports first reported, the Los Angeles Clippers have agreed to trade Eric Bledsoe to the Phoenix Suns as part of a three-team trade which will net J.J. Redick and Jared Dudley for the Clippers.

Trade rumors had linked Orlando, who dealt Redick to the Milwaukee Bucks in February, to Bledsoe for over a month. Caron Butler would have joined Bledsoe in Orlando, with the Magic sending Arron Afflalo and perhaps Andrew Nicholson to L.A. Instead, Bledsoe and Butler are bound for the desert, and the Magic will have to look elsewhere in their search for a young point guard for the veteran Jameer Nelson to groom.

On the night of the NBA Draft, Magic general manager Rob Hennigan said that he "may revisit" trade talks with L.A. later in the summer. A report Monday said talks between the Magic and the Clippers were ongoing, but it now appears that L.A. managed to find a more palatable deal. 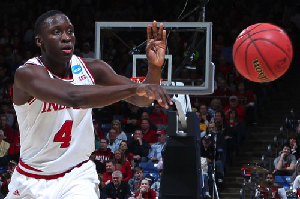 It's possible that Victor Oladipo, the second overall pick in Thursday's Draft and a natural shooting guard, could play a little point guard. Orlando will reportedly try him at the one in the Orlando Pro Summer League, which event begins Sunday.

As part of the trade, which the NBA cannot approve until after the moratorium on player movement ends on July 10th, Redick will receive a four-year deal worth $27 million.