Orlando announced Saturday key decisions regarding the futures of two of its young reserves.

The Orlando Magic have decided to guarantee the contract of E`Twaun Moore for the 2013/14 season, the team announced Saturday. Moore's contract--which is worth slightly less than $900,000, according to ShamSports--would have become fully guaranteed if he were still on the roster at 5 PM on Sunday.

Moore, 24, was the Magic's highest-profile free-agent signing in their first offseason under Rob Hennigan. Signed in September, the Purdue product went on to make 75 appearances in Orlando pinstripes, averaging 7.8 points, 2.2 rebounds, 2.7 assists, and 1.4 turnovers per game. 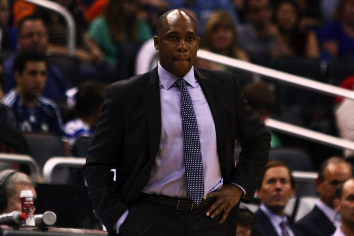 See where Moore and Jones fit on the Magic's new depth chart.

The Magic played Moore at point guard for much of the season out of necessity, until the acquisition of Beno Udrih at the trading deadline. He's not a natural playmaker and struggles to create efficient shots for himself at shooting guard, but keeping him around on a minimum salary makes some measure of sense for an Orlando team which probably doesn't intend to break the bank on a free-agent backup guard.

The Boston Celtics made Moore the 55th overall pick in the 2011 NBA Draft. After one season, they traded him to the Portland Trail Blazers, who subsequently waived him, which move freed him to sign with Orlando before training camp.

Orlando made another personnel call on Saturday, announcing that it would not extend DeQuan Jones a qualifying offer. As such, Jones will become an unrestricted free agent. The team noted that Jones will still play for Orlando's Summer-League squad.

Jones, now 23, went undrafted out of The U in 2012 and latched on with the Magic's Summer-League squad, parlaying his strong showing there into a training-camp invitation. Jones beat the veteran Quentin Richardson for the Magic's final roster spot and averaged 3.7 points and 1.7 rebounds in his rookie season.

The Magic can still re-sign Jones if they so choose. However, by not giving him a qualifying offer, they lose the right of first refusal if he signs a contract with another team.

Given that Jones' performance as a rookie was such that he was unlikely to sign for anything more lucrative than the minimum, declining the qualifying offer is a sensible move.