The Magic's GM praised Oladipo's work ethic and explained why he picked Osby, a power forward, despite having a roster stocked with them.

A few minutes after midnight on Friday, Orlando Magic general manager Rob Hennigan met with the media to discuss his team's activity in the 2013 NBA Draft. Hennigan took the podium at Amway Center having selected Victor Oladipo and Romero Osby with the second and 51st overall picks, respectively. He addressed their futures, as well as the Magic's Summer League, personnel decisions for two reserves, and the potential of an Eric Bledsoe trade, in his news conference.

"When we first started evaluating him early in the season," Hennigan said of Oladipo, "his competitive spirit really resonated with us." He estimated that his staff scouted the Indiana shooting guard "maybe a half-dozen times" in person during Oladipo's senior season. While the Magic had a good feeling about Oladipo after meeting him personally for a pre-Draft workout and interview, Hennigan said he only decided to select Oladipo "within the last couple of days." Orlando, after all, still "had to work through the process and continue to gather information on all of the other prospects." 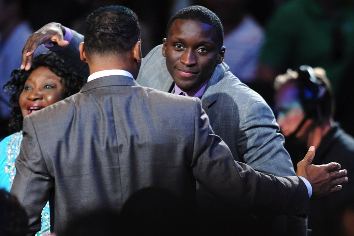 Tyler Lashbrook breaks down how the two newest members of the Magic fit with the team.

One of those prospects whom Orlando evaluated was Kentucky Wildcats center Nerlens Noel. After the Cleveland Cavaliers picked Anthony Bennett first overall, Noel was still available when the Magic picked, but Hennigan and his staff elected to pass on the athletic, 6-foot-11 pivot. Noel is recovering from a torn ACL in his left knee, which may have left some teams wary about selecting him. Hennigan said that Noel's injury "played in a little bit" in Orlando's decision not to pick him, "but it certainly wasn't the end-all, be-all reason."

Noel slid all the way to the New Orleans Pelicans at the sixth pick, with the Pelicans immediately trading him and a top-five protected first-round choice in 2014 to the Philadelphia 76ers for All-Star point guard Jrue Holiday. "We had a lot of different things thrown our way," Hennigan said of the possibility of taking Noel and flipping as New Orleans did. "That specific deal was not one of them."

Hennigan is enamored of Oladipo's mental make-up. "We like Victor because we feel like Victor has a work ethic and an approach to the game that will allow him to continually improve," Hennigan said. "We feel that way about a lot of the players we have. It was more about his approach and his work ethic and his tenacity that really resonated with us." And the Magic's young GM has no doubt that Oladipo will fit right in with the rebuilding Magic, who won only 20 games in 2012/13.

"He's humble, he's a hard worker, he's unselfish, and he wants to be a great player in this league," Hennigan said. "And we feel like those ingredients are ingredients that mesh well with what we're trying to build here."

"Any time you have someone who wants to play defense and gets excited about defense, that excites us, and that was one of the reasons that we liked him as much as we do." Rob Hennigan on Victor Oladipo

Defense is where Oladipo is closer to a finished product. He earned Defensive Player of the Year honors for his junior year at Indiana, in which he averaged 2.2 steals and 0.8 blocks. His 6-foot-9 wingspan helps him defend both guard positions, a skill which Hennigan believes will translate to the NBA. He also said it's possible that Oladipo could check small forwards at the NBA level, though "time will tell" on that front.

Oladipo's mental work at that end might outshine his physical profile, though. "I think we really saw Victor as someone who took pride in defense, took pride in defending the best player on the opposing team," Hennigan said. "Any time you have someone who wants to play defense and gets excited about defense, that excites us, and that was one of the reasons that we liked him as much as we do."

While Oladipo has made a name for himself as a defender, Hennigan thinks he can contribute on offense as well. Hennigan pointed toward Oladipo's improvement between his sophomore and junior seasons--Oladipo increased his scoring average from 10.8 to 13.6 and his field-goal shooting from 47.1 percent to 59.9 percent--as a sign that the best has yet to come.

"We felt that [the improved production] really speaks to his work ethic and his ambition and his drive in the summer to make himself into a player," said Hennigan. "We like the fact that those spikes occurred because we felt it was indicative of a relentless ambition to get better."

Oladipo is scheduled to meet the media on Friday afternoon at Amway Center.

Osby a surprising pickup at 51

Hennigan's decision to pick Osby came as a surprise to some Magic fans, as Orlando is already well stocked at power forward. "At that point in the draft, a lot of times you look for just players you like, regardless of what position they play or don't play," said Hennigan.

Osby's profile is similar to that of Andrew Nicholson, whom Hennigan selected with the 19th overall pick in 2012. Like Nicholson, Osby is an efficient big man with four years of college experience. That wasn't necessarily on purpose. "I would call that random coincidence rather than a plan or strategy," he said.

The Draft is, of course, just one means for Orlando to improve over the offseason. The Magic have plenty of tasks ahead of them, including putting together a Summer League roster and deciding on the futures of some of their incumbent players.

The Magic's staff had, as Hennigan was addressing the media, already begun the process of assembling their Summer League squad. For that reason, Hennigan was unable to name specific players who could be on the team. The Orlando Pro Summer League runs from July 7th-12th.

Orlando also has decisions to make regarding second-year combo guard E`Twaun Moore and rookie swingman DeQuan Jones. Moore's contract for 2013/14 becomes fully guaranteed if the Magic don't waive him before July 1st, while Orlando must extend to Jones a qualifying offer in order to make the Miami product a restricted free agent. "We'll have to spend the next few days collecting our thoughts on those two issues," said Hennigan. "[We] have not come to a conclusion yet on either one."

Another option for Orlando is to trade, and rumors have linked the Magic to Los Angeles Clippers point guard Eric Bledsoe for over a month. When asked where that rumored deal stands, Hennigan responded by saying "I don't think it's standing right now. It might be kneeling." The Magic "may" re-engage the Clippers in those talks as the summer progresses, "but as of now there's nothing to say about it."