Orlando added the Oklahoma power forward to its core in Thursday's Draft, taking him 51st overall.

The Orlando Magic have selected Rombero Osby with the 51st overall pick in the 2013 NBA Draft. General manager Rob Hennigan made that selection about four hours after he used the second overall pick on Indiana Hoosiers shooting guard Victor Oladipo. 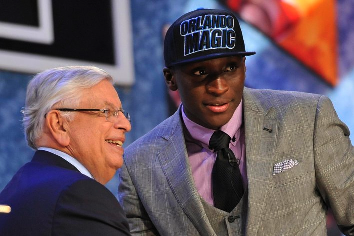 Orlando upgraded its wing rotation by selecting the Indiana shooting guard with the second overall pick.

Osby, a 6-foot-8 power forward from Oklahoma, averaged 16 points, seven rebounds, and 1.3 assists in his senior NCAA season at Oklahoma. He transferred there from Mississippi State. He shot 52.6 percent from the field.

Orlando acquired the 51st pick from the Denver Nuggets as part of the Dwight Howard trade in August. The Magic did not have their own second-rounder in the 2013 Draft because of their 2011 trade for the Draft rights to Justin Harper.

Barring a trade for one of the final nine picks in the Draft, Orlando's night is over.