Bloggers from SB Nation's NBA blogs took part in a Mock Draft, an event which you can follow in this StoryStream at Ridiculous Upside. The bloggers took control of the teams they cover and selected on their behalves. They were allowed to negotiate trades involving picks and players.

Our goals were to stockpile young talent and to, if possible, clear salary-cap space.

Now that it's in the books, I wanted to recap what Orlando Pinstriped Post did in the Orlando Magic's stead, explain why we made the choices we did, and give you the opportunity to grade our moves.

Entering the Draft, our goals were to stockpile young talent and to, if possible, clear salary-cap space in order to preserve future flexibility.

Bearing those two goals in mind, here are the moves we made... and some that we didn't.

Before the Draft got underway, the GM of the Philadelphia 76ers, represented by Liberty Ballers, offered combo forward Thaddeus Young and the 11th overall pick for big man Al Harrington and the second pick. I gave serious consideration to the trade, but ultimately had to turn it down.

I was interested in getting another lottery pick, and I wasn't entirely opposed to trading out of the no. 2, but the no. 11 wasn't a high enough selection to justify a pick swap. To part with the no. 2 and move so far down, I'd want to score a better talent than Young in return. And while I admire Young's game, I have serious questions about how he'd fit in with a team that already has Tobias Harris and Maurice Harkless at the forward spots.

Having moved on from Philly, I got in touch with the Phoenix Suns' GM, represented by Bright Side of the Sun, regarding the subject of swapping picks; Phoenix owns the fifth overall selection. I knew that some people on the Bright Side crew were high on Indiana shooting guard Victor Oladipo after seeing that staff writer Sean Sullivan compared him to a young Michael Jordan in May. So I offered the GM a surefire way to get Oladipo.

I proposed sending Glen Davis and the no. 2 to Phoenix for combo guard Shannon Brown, who has a non-guaranteed contract, and the fifth overall pick. Ultimately, Phoenix decided that taking on Davis' contract wasn't worth moving up three spots to pick a guy who may ultimately be there at no. 5 anyway, so it walked away from negotiations.

The move proved prudent: Oladipo was indeed still on the board when the Suns selected, so they picked him up there.

Select Ben McLemore from Kansas with the no. 2 overall pick

This selection is pretty straightforward. The Cleveland Cavaliers, represented by Fear the Sword, picked Nerlens Noel with the top pick, as I expected they would; the FtS crew, led by Conrad Kaczmarek, has been united in its support of Noel. 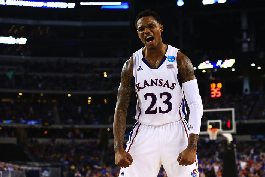 Tyler Lashbrook scouts McLemore and weighs in on the Kansas product's fit with the Magic.

With Noel off the board, McLemore was a pretty obvious selection as the best talent on the board, though I considered taking Michigan point guard Trey Burke as well. In the end, I decided that taking Burke second overall would be a reach, so while I was on the clock I engaged a few other general managers via email to see if they were interested in trading up to the second spot. There was absolutely no interest, so I moved forward with the selection.

Here's an excerpt of my explanation for taking McLemore, which you can read in full at Ridiculous Upside:

[...] McLemore is too talented a prospect, and too valuable an asset, to let slip. Orlando, coming off a 62-loss season and with one of the weakest rosters in the league, can't be too picky about positions when it comes to rebuilding. It has to amass assets, either to add them to a core group of talented youngsters or to raise their value and flip them via trade down the line. McLemore is a coveted asset, and though he won't live up to the overblown and unfair comparisons to Ray Allen, he should have a fine professional career.

McLemore is a favorite of OPP readers, having finished tops on the Community Draft Board by a wide margin.

Though my efforts to trade down to select Burke failed, I didn't stop looking for another lottery pick. The thinking there was to nab a point-guard prospect like CJ McCollum, Dennis Schröder, Kentavious Caldwell-Pope, or Shane Larkin.

Having targeted those players, I engaged the GM of the Dallas Mavericks, represented by Mavs Moneyball, and expressed a willingness to help him clear his salary cap, at the price of the 13th overall pick. I did not mention specific Mavs players, but did say that I'd be willing to absorb some salary with the Dwight Howard trade exception. 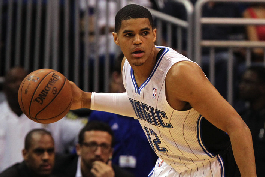 After being mothballed in Milwaukee, Harris enjoyed an expanded role with the Magic. Evan Dunlap recounts his half-season in pinstripes.

The GM, however, was not interested in making a salary dump. He would have parted with the no. 13, but he insisted on acquiring Harris and possibly Jameer Nelson, plus at least one future Draft pick, in return. I countered by offering Andrew Nicholson instead of Harris and Nelson, at which point the GM made clear that he would not accept any offer for the no. 13 unless Harris was included. The Mavericks wanted to reload with cheap, young talent instead of making a splash with free-agent dollars.

I pulled out of the negotiations there. The no. 13 pick is an attractive asset, but I doubt anyone picked there will have a better NBA career than Harris, the combo forward who averaged 17.3 points, 8.5 rebounds, 2.1 assists, and 1.4 blocks in 27 games with Orlando.

Dallas went on to select Shabazz Muhammad with the 13th pick.

Trade with Brooklyn for no. 22 pick

Before the Brooklyn Nets were on the clock with the 22nd overall pick, their GM expressed an interest in trading the pick in a package with power forward Kris Humphries' expiring contract and shooting guard MarShon Brooks. I jumped at the chance to acquire another pick and potentially clear some salary, though I did not, at the time, have my eye on any particular player still on the board. By that time, no one I was considering with that potential no. 13 from Dallas was still available: McCollum went eighth to the Detroit Pistons, Schröder went 14th to the Utah Jazz, Caldwell-Pope went 9th to the Minnesota Timberwolves, and Larkin went 15th to the Milwaukee Bucks.

After I got in touch with him, Brooklyn's GM said he was interested in Arron Afflalo and Nicholson. I indicated that both players were available in the right package and asked if he had any interest in Davis. When he said he did, we agreed on a three-for-three swap: Orlando would obtain Humphries, Brooks, and the 22nd pick. Brooklyn, in turn, would receive Afflalo, Davis, and Nicholson.

I entered these negotiations pessimistic that the Nets would agree to take both Afflalo and Davis without exacting at least one future Draft pick as a premium for taking on so much future salary, so I was thrilled not to have to send a future asset away. It occurs to me now that I might have able to acquire the floor-spacing forward Toko Shengelia in this deal, but in my haste to accept it, I neglected to ask about his availability.

Once Seth Pollack, our version of David Stern, approved the trade, the league's other general managers expressed their surprise that I'd be willing part with two of Orlando's top veterans and a young asset. I didn't share their concerns: I had just reduced the Magic's 2014/15 cap to Nelson's $2 million guarantee, whatever amount remains as a result of Harrington's buyout, plus team options on some rookie contract players.

The full explanation of the deal, which touches on my willingness to part with Nicholson, is available at Ridiculous Upside.

Select Erick Green from Virginia Tech with the no. 22 overall pick

While I negotiated trade terms with Brooklyn, I brought Tyler Lashbrook, my assistant GM and OPP's resident Draft expert, into the loop. I asked if he would advise making the Brooklyn trade--he did, without reservation--and then consulted with him on which players I should target with the 22nd pick. I mentioned that Cal shooting guard Allen Crabbe and Pitt center Steven Adams were my two favorite players left on the board, but I wasn't sure about either of them. 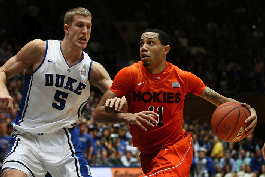 We eventually narrowed our options to Green and Mitchell. Green's a versatile scorer who has a ways to go as a playmaker, but given the Magic's need for backcourt depth, we liked him. Mitchell might have more upside and is arguably a lottery-level talent, but Tyler expressed concerns about how he'll develop in the NBA, having watched him loaf through some games with the Mean Green.

As a result of Tyler's insight, I made the call to select Green, thus ending the Magic's involvement in the Draft. We did not seek any opportunities to acquire yet another first-round pick, nor were any such opportunities presented to us. The SB Nation Mock Draft did not continue into the second round.

To recap, the Magic lost Afflalo, Davis, and Nicholson in this Draft. They added McLemore, Green, Humphries, and Brooks.

We project that Orlando will waive Türkoğlu and reach a buyout agreement with Harrington, making them free agents but keeping some portion of their salaries on the books. The contracts for Moore and O'Quinn are unguaranteed, while the Magic have the option to make Jones a restricted free agent. Given that the team can keep all three players cheaply--less than $1 million each--we believe Orlando will retain the trio of youngsters. Udrih will become an unrestricted free agent and his future with the team is less clear. In this specific instance, with Green joining the team and Moore able to play point guard in a pinch, it's unlikely that Orlando would make Udrih a competitive free-agent offer.

Even after trading Afflalo and Davis, the Magic won't have significant salary-cap space to sign an impact free agent in 2013. Nonetheless, I feel like I accomplished the goals I set out to--get young talent, clear cap space--in this exercise, and am thus pleased with the results.

How would you assess OPP's work in this Mock Draft? Please vote in the poll below and let us know your specific feedback in the comments.