The Miami Heat knocked off the San Antonio Spurs on Thursday night, 95-88, to secure their second consecutive NBA championship. While Miami's Game Seven victory is sure to rankle fans of the Orlando Magic, there's at least one positive they can appreciate: Rashard Lewis is now an NBA champion.

To be clear, Lewis played sparingly with the Heat after signing with them as a free agent in July 2012, making just 55 appearances. His role diminished even further in the postseason, as coach Erik Spoelstra tightened Miami's rotation: Lewis averaged just 4.2 minutes across 11 playoff games total, and logged just 12 minutes and four points in three Finals appearances. 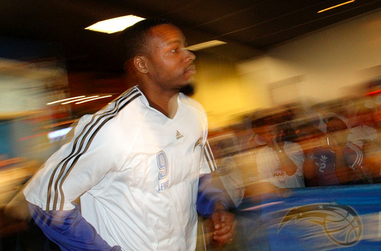 Nonetheless, no one can take this title away from Lewis, or strike it from his résumé, which already included two All-Star appearances and an eighth-place mark on the NBA's all-time list of made threes.

And Lewis' victory is one Magic fans can relish, if they can manage to extricate it from the larger, less appealing truth that their team's in-state rivals have captured their third title in four tries. Lewis was, in his three-plus seasons with the Magic, a model player and teammate. He fit in comfortably alongside Dwight Howard and quietly went about his business, transitioning from a go-to scorer at small forward with the Seattle SuperSonics to a complementary player at power forward in Orlando. In the partial season before the Magic dealt him to the Washington Wizards for Gilbert Arenas, Lewis had to shift back to small forward in order to accommodate the emerging Brandon Bass at power forward, and yet he did so without complaint, even though the transition couldn't have been easy. Playing with a sore knee and having to defend quicker players than he had in years, Lewis' per-game scoring mark dipped from 14.1 to 12.2, with his three-point shooting percentage plummeting from 39.7 to 36.7.

Apart from his great character, Lewis produced, especially in key moments; it's worth noting that Lewis' best Magic performances occurred in postseason play, and that Lewis posted the best single-game Finals performance in franchise history when he notched 34 points, 11 rebounds, and seven assists in Game Two of the 2009 NBA Finals against the Los Angeles Lakers. Had Orlando won that game--one made infamous by Courtney Lee's missed alley-oop layup with the score tied at 88 and 10 seconds to play in regulation--it's fair to wonder if the Magic might have gone on to win the series, and how, in turn, that victory would have affected Lewis' legacy.

Even fans who deride him for the six-year, $118 million contract he signed with the Magic ought to be able to appreciate his victory on Thursday. Meanwhile, Orlando awaits its next top-dollar free-agent signing, and hopes that he'll succeed in pinstripes where Lewis could not.