Two analysts said Orlando would be the best team for the two Draft prospects to grow as professionals.

Kevin Pelton said the Orlando Magic would be the best fit for Carter-Williams, pointing out that "[t]he Magic are really the only team in the league with a veteran point guard (Jameer Nelson) good enough to start in front of Carter-Williams but also expendable when he is ready to claim the job." Nelson, a Magic co-captain, could teach Carter-Williams the proverbial ropes until the Syracuse product is ready to take over the team. 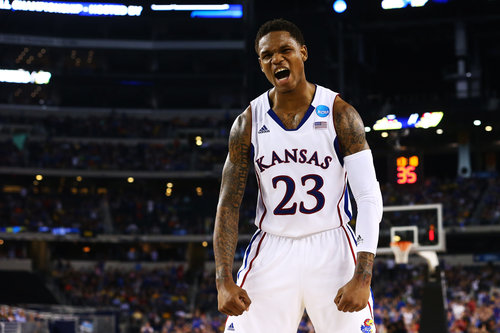 Fran Fraschilla, meanwhile, believes Orlando would be the best place for McLemore to grow, because he's "a third quality piece," joining Moe Harkless and Tobias Harris. Further, the Magic would be able to offer McLemore a starting role "from day one," Fraschilla says, though Fraschilla is unclear whether Orlando would bench Harkless or Arron Afflalo in that instance.

McLemore averaged 15.9 points, 5.2 rebounds, two assists, and a steal in his lone season as a Jayhawk. He shot 42 percent from three-point range while trying 4.7 triples per game, suggesting that he has the perimeter scoring chops to make him an impact player at the next level.

Orlando Pinstriped Post readers selected McLemore as the top prospect on the Community Draft Board, even ahead of Kentucky center Nerlens Noel. Voters chose Carter-Williams as the ninth-best prospect in the Draft, and the third-best point guard, behind Trey Burke of Michigan (fourth overall) and CJ McCollum of Lehigh (eighth).