Only five players from the last year of Dwight Howard's Magic career returned for the first season of the team's rebuild.

Share All sharing options for: Returning Magic players didn't see much action in 2012/13

When Dwight Howard made it clear that he no longer wished to play for the Orlando Magic, newly hired general manager Rob Hennigan set about rebuilding the team, and he wasted no time in turning over the roster. Jameer Nelson, Glen Davis, J.J. Redick, Ish Smith, and Hedo Türkoğlu were the only five players from Howard's last season with the Magic who returned for 2012/13, and Hennigan would go on to trade Redick and Smith in February.

The pie chart below shows the percentage of Orlando's minutes in 2012/13 that each player logged, with the five returning players spotlighted in the exploded section at the right. Newcomers accounted for a whopping 74 percent of the Magic's minutes in the first year of the post-Howard rebuild. 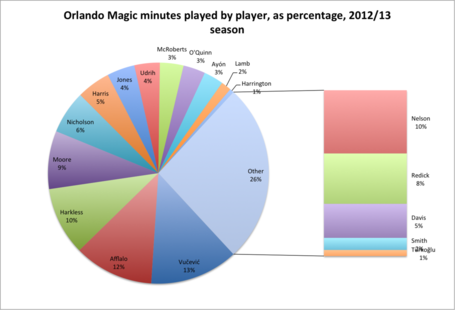 The returning players' diminished roles weren't necessarily by design: Nelson and Davis missed a combined 74 games due to injuries, and an injury-riddled Türkoğlu fell out of the rotation for good following a league-mandated suspension of 20 games for violating its drug policy. Nonetheless, the large portion of minutes that the newcomers played attests to the franchise's new direction.