We've gone through profiles of players at the top of draft boards, we've looked at a slew of point guards and we examined shooting guard and small forward prospects. It's only right we talk about big men at this point.

Tyler Lashbrook takes a look at some power forward and center prospects who may be available when the Orlando Magic select in the second round of the 2013 NBA Draft. As a result of Tuesday's lottery, Orlando will have the second overall pick in the first round. - Ed.

The Orlando Magic have a nice core of young power forwards and centers: Nikola Vucevic, Tobias Harris, Andrew Nicholson, and Kyle O`Quinn. But with reports that Gani Lawal was invited to work out for the team, it's very possible that Rob Hennigan is looking to add even more depth to that young core. With that, let's look at some draft prospects:

Tony Mitchell is a physical specimen, a man whose appearance inspires awe. He's built like a boulder, even on top of his nearly 7-foot-3 wingspan. He's one of the most athletic players with his size, too. He registered a 38-inch max vertical at the Combine and tested well in the speed drills also. Plus he did this at the North Texas dunk contest.

The next Paul George? 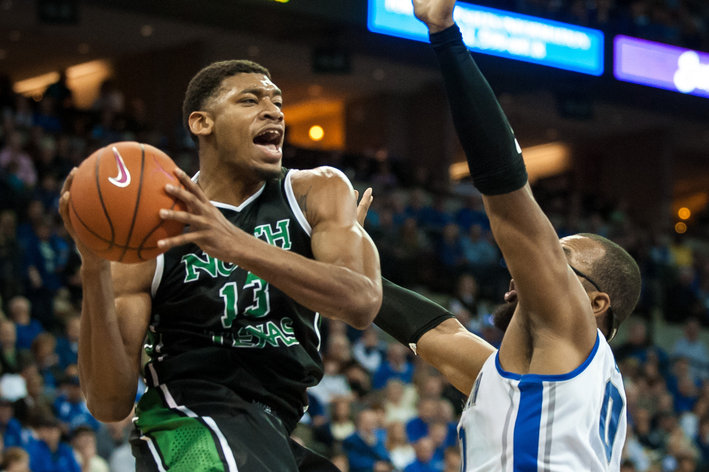 Looking for an athletic, long wing with mixed results in college but an impeccable physical profile and evidence of skill? Look at North Texas, says Jonathan Tjarks.

Mitchell thrives on the glass, where he grabbed 29.1 percent of defensive rebounds in his freshman season, though that number dropped to 20.6 percent in his sophomore season. Most of his points come off of opportunities at the rim that he creates with his great combination of size and athleticism. Defensively, he loves looking for shots to block and has all the potential in the world to become a defensive player in the NBA.

But the fundamentals aren't there yet. And neither is the consistent effort needed to be a defensive player in the NBA. I got a chance to watch him live a couple of times in his collegiate career and it was always disappointing to see how he could have dominated the Sun Belt but didn't. He was obviously the most talented, most physically dominant player in the conference but never asserted himself with the type of effort that one would like to see.

It is concerning for scouts how badly Mitchell's numbers dropped off in his sophomore season. He dropped in points, rebounds, blocks, and assists while becoming drastically less efficient. The Mean Green as a whole disappointed this past season by finishing 12-20 overall after making the conference championship in the previous year. The program went through a coaching change and that could be one of the reasons for Mitchell's head-scratching decline in his sophomore season.

After his freshman year, he was touted as a lottery pick with top-10 potential and that potential is still there. But with how bad his sophomore season ended, he could theoretically drop to the Magic at No. 51, though that'd probably be a far decline. Mitchell needs coaching. He needs motivation. If a coach could tap into that potential, he could be one of the gems in the draft.

According to Josh Robbins, Orlando met with Roberson at the Combine. What he will bring to an NBA really seems to fit with how the Magic are wanting to build. And there's a really good chance he'll be available when the Magic are up to bat at No. 51.

Roberson is one of college basketball's elite rebounders who will make his money on the boards. His career 12.6 offensive and 27.1 defensive rebounding rates speak to his desire to constantly hound the glass on both ends of the floor. He's a solid athlete who's willing to put his body on the line to chase down loose balls and attack the boards. He's a little undersized for the power forward spot but he makes up with it for a nice wingspan and nonstop motor.

He's not a great shooter but he did work to expand his range. He shot 38 percent from three on 1.4 attempts his sophomore year and 32.8 percent on 1.9 attempts in his junior campaign. He shoots the ball a little low but mechanically it's not an awful shooting motion. He is, however, limited with the ball in his hands. His handle is shaky and he heavily favors driving with his right hand.

He's undersized for the power forward spot and doesn't have the offensive ability to play the small forward full time. But so was Kenneth Faried. And Roberson has a lot of Faried-like qualities in his game.

If Muscala drops to No. 51, the Magic should take him because he'll easily be the best player available. The Bucknell big man was one of the toughest players to guard in all of college basketball and will be ready to play in the NBA as soon as he steps on the floor.

He's got an excellent mid-range game and is comfortable in both catch-and-shoot and pick-and-pop situations. In the post, he looks ambidextrous. He can turn over either shoulder with a jump hook or spin back the opposite way and finish with either hand. He's a great passer out of the post, averaging 2.3 assists per game in his senior season.

He averaged 15 rebounds per 40 minutes, via DraftExpress. That's probably because he's extremely active on both ends of the floor around the bucket. He understands defensive positioning much more than his 2.4 rebounds per game show. He's not the greatest athlete but he's extremely mobile and has the nimble footwork to get to spots on the floor where he's comfortable. He has all the tools to become an excellent roll man in the NBA.

What's keeping him from being a lottery pick is where he played his college ball. The Patriot League isn't the greatest hotbed for NBA talent and the competition Muscala faced day-in and day-out is nowhere near what he'll see in the league. He also doesn't appear to be as strong as he needs to be, though his massive frame looks like it could hold more weight.

In a way, he's a little like Vucevic. O'Quinn doesn't have the size to be a center and having Muscala could present the Magic an interesting option to play a huge lineup with Vucevic and Muscala together at power forward and center. Muscala has a great mid-range jumper and is a solid passer so he could develop an awesome high-low game with Vucevic. Watch some tape on the guy, Magic fans. You'll love him.

Colton Iverson is a big, big dude. After transferring from Minnesota to Colorada State for his senior year, Iverson, 23, played himself into being a legit NBA prospect. He isn't a great athlete and he's not particularly long but he's incredibly strong, tough, and he has a nice motor to go along with that size.

Most strong interior players lack the touch and hands to be an offensive threat, but that's not the case for Iverson. He's very efficient around the rim and seems to have a basic understanding of what he is and what he isn't capable of doing on the court. He won't be able to bully his way through defenders in the NBA like he did in college, so continuing to develop both hands around the basket will be a must.

He'll never be explosive offensively and he'll never be a great shot-blocker. But what he can do is battle on the defensive glass. He'll need to learn positioning to become viable defensively in the NBA. He will have troubling guarding the pick-and-rolls as he doesn't have the foot speed to aggressively hedge a screen and then recover to his man.

The first thing you'll notice about Carmichael, 23, out of Illinois State, is his enormous stature. Carmichael isn't muscularly sculpted like Tony Mitchell, he's built more like Glen Davis and Jared Sullinger. And he knows exactly how to use his brute strength.

It's nearly impossible to establish post position against the Redbird, because he's extremely strong. And when someone does post up against him, he does a good job of moving his feet and staying straight up, utilizing his nearly 7-foot-2 wingspan to his advantage. On the other end, Carmichael loves setting punishing screens. He plants his feet and it's nearly impossible to get around him.

He has great rebounding technique and never takes a possession off on the glass. And Carmichael's surprisingly athletic. He often finishes alley-oops above the rim and blocks shots off the ball. He's solid both in the pick-and-roll and in post-up situations.

He has extremely limited range, rarely shooting beyond 15 feet. His career 68.8 percent free throw shooting would suggest that he has nice touch, but he just doesn't look comfortable around the perimeter. But maybe that's okay to Magic fans who have been stuck watching Davis consistently jack up contested jumpers from mid-range. Carmichael isn't really a power forward though he's a little undersized to be a full-time center. He won't have the foot speed to guard quicker fours and will need to be around the basket on both ends to be effective.