The Indiana prospect vastly improved during his three seasons in Bloomington. But how will he translate to the NBA and how would he fit in with the Magic?

Victor Oladipo's rise to the top of NBA draft boards is much different than his peers. Oladipo came to Indiana, under coach Tom Creen, with limited expectations. He was ranked the No. 32 shooting guard by Scout.com and pegged as an athletic guard with decent size but limited offensive ability.

In his freshman year on campus, he matched that description. Oladipo averaged 18 minutes per game as a role player, finding most of his buckets from hustle plays and earning playing time off of sheer effort. He capitalized on his athletic potential in his sophomore season, becoming a defensive stopper with a nonstop motor for Indiana as the Hoosiers turned the program around, finishing 27-9 and losing in the Sweet 16 to the eventual champion Kentucky Wildcats.

In 2012-13 Oladipo began to open eyes of scouts as his offensive game finally began to catch up to his elite athleticism.

In his first two seasons in Indiana, "YOLOdipo" proved that he had the potential to become a high-energy role player in the NBA. In his junior season he proved to be a consensus top-10 pick. His biggest knock had always been his lack of outside shooting. But this past season, his three-point percentage sky rocketed to 44.1 percent, more than doubling that of his sophomore season.

At the beginning of the season, most scouts would have told you that Oladipo's teammate Cody Zeller was the best player on the team and was a surefire top-10 pick. But throughout the season, Oladipo proved to be the more consistent player and the most important player to a Hooisers team that earned a No. 1 seed in the NCAA tournament. 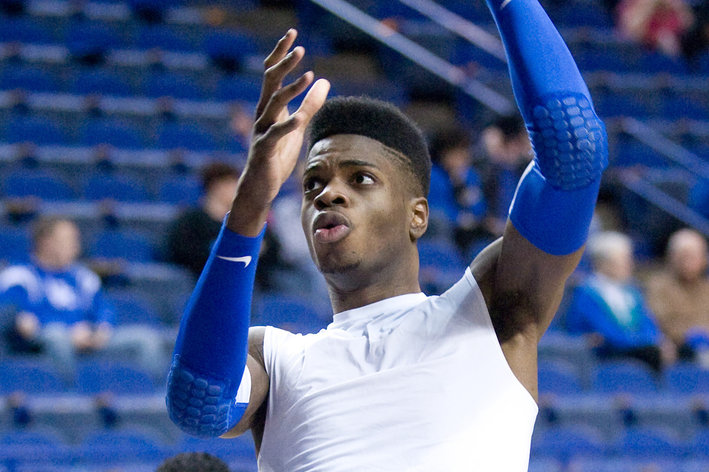 Without a doubt, Oladipo's biggest strength is his insane athletic ability and he uses it to his advantage in every way imaginable. I mean, just look at this missed dunk. The internet called it the greatest missed dunk of all time. I still remember where I was when it happened, as I'm sure mostly everyone else who saw it live does too.

Oladipo has remarkable jumping ability and combines it with elite speed laterally and vertically. His hands are extremely fast and he seems to never run out of energy. That makes him an incredible on-ball defender, easily the best in this year's draft class. His on-ball defense is really a joy to watch.

He is constantly hounding ball handlers. He has the ability to stay low, move his feet, and keep his hands active, creating havoc against whoever he is guarding. In the pick-and-roll, he's strong and slippery enough to move around screens and fast enough to recover to contest the shot. Off the ball, he's a menace. When he's face-guarding, he uses his elite athleticism to literally shadow his man, disrupting the offense and killing the rhythm of shooters. He also has great instincts and he uses them to jump the passing lanes, stealing the ball and getting easy buckets in transition. At the NBA level, he will be able to defend point guards, shooting guards and smaller small forwards.

Oladipo's defense is great--everyone knows that--but his improvement on offense catapulted his draft stock and is what makes him so much more intriguing to GMs around the league. Oladipo is an excellent cutter, works well around the baseline and finishes efficiently at the rim. He works well without the ball as a slasher to the rim and uses his athleticism to his advantage around the bucket.

As a jump-shooter, his vastly improved outside stroke forces defenses to remain honest with him along the perimeter. He looks much more comfortable shooting than he did in his freshman season, as his shot is much more fluid and he's a lot less hesitant to let it fly. Even his free throw shooting rose, from 61.2 percent on 85 attempts as a freshman to 73.6 percent on 130 attempts in 2012-13.

His offense is improving, but there are still a lot of question marks. His 44.1 percent shooting from three-point range came on fewer than two attempts a game. Some analysts wander if his recent spike in shooting is a fluke or a product of hard work in the off-season. If he regresses back to his first two years at Indiana, will he be able to remain a shooting guard or will he move to small forward where he's a little undersized?

Oladipo also struggled in creating his own offense. His ball handling, though improving, still isn't on the level that it needs to be to become a starting NBA shooting guard and it limits what he can do on offense. His lack of elite dribbling limited him to predictable straight-line drives with his right hand. It also limits his ability to run pick-and-rolls, especially in the NBA where defenses will force him back to his left hand. My theory is that he's so fast that it's taking him longer for his ball handling to catch up.

He also doesn't get to the free throw line at the rate that his elite athleticism would suggest that he could. Right now, he shot just 3.6 free throws a game, a stat that many people in the league would like to see rise as his ball handling improves.

It stands reason to believe that a part of Oladipo's weakness in creating for himself comes with his playing style. He's plays so hard on every possession, choosing to work up a head of steam, lowering his shoulder and attacking the rim with vengeance rather than patiently weighing his options and taking what is available. In that sense, he's a little like a smaller Michael Kidd-Gilchrist with a better outside jumper.

As far as comparisons go, some analysts, including ESPN's Chad Ford, say that Oladipo has a little Dwyane Wade in him. I don't really see that comparison, as Wade's range of scoring when he was at Marquette far exceeds Oladipo's. Oladipo reminds me more of Tony Allen. Both are active defensive stoppers who thrive on the offensive glass. However, Oladipo's 44.1 percent shooting from downtown is much better than Allen ever had at Oklahoma State.

Oladipo isn't going to be a star in the league but he has the potential to become one of the NBA's best perimeter defenders. And his continuing progress on the offensive end has to excite whatever team decides to select him. He's a hard-working player with explosive athleticism and a willingness to improve his game.

Oladipo would fit in with the Orlando Magic the same way that Ben McLemore would: by becoming the Magic's shooting guard of the future. Drafting him would mean that Orlando expects the trio of Moe Harkless, Tobias Harris, and Nikola Vucevic to continue to develop offensively enough to cover for Oladipo's early offensive deficiencies.

Realistically, the Magic could trade back to draft Oladipo if they really fell in love with him during workouts. Rob Hennigan has shown a willingness to build around young, hard-working, high character guys and that's exactly what Oladipo is. This would mean that Hennigan and the Orlando front office see their point guard of the future in the 2014 draft. That train of though makes sense, with all of the reports of the Magic coveting Oklahoma State's Marcus Smart, who is returning to school for the 2013-14 season.