Arron Afflalo isn't overpaid, but he is overworked

Forbes contends that Afflalo is among the NBA's most overpaid players. Orlando Pinstriped Post explains why the financial magazine's assessment misses the mark.

Share All sharing options for: Arron Afflalo isn't overpaid, but he is overworked

Over the weekend, Forbes released its list of the NBA's most overpaid players for 2012/13. It's an annual exercise for the publication, and trying to suss out whether players are over- or underpaid is a familiar topic around Orlando Pinstriped Post, as this site has done posts on Orlando Magic players' performances relative to their salaries in each of the last two seasons.

Curiously, Magic swingman Arron Afflalo rounds out Forbes' most recent list. "Shoots 30% on three-pointers and 44% overall, not enough for a scorer who averages three assists a game," reads the blurb on the UCLA product. It's tough to argue against Forbes' message there--Afflalo's percentages and efficiency were dreadful all year before he suffered a season-ending hamstring strain--but I don't think that analysis warrants placing Afflalo in the NBA's overpaid camp alongside the likes of Rudy Gay, Stephen Jackson, and Ben Gordon, among others.

At $7.8 million, Afflalo is paid just slightly more than the league average. And his past performance suggests that he's a slightly better-than-average player. His problem in Orlando is that the Magic, because of their lack of talent, have to ask him to do far too many things offensively. Due to circumstances outside his control, Afflalo is a complementary player masquerading as a leading man.

When the Denver Nuggets signed Afflalo to his current deal, he was coming off a season in which he averaged 12.6 points, 3.6 rebounds, and 2.4 assists on 62 percent True Shooting. He served as a capable defender and a lethal corner three-point specialist for a playoff team, one which had at least three other more capable offensive players on the floor at all times. Afflalo's usage rate that season was 14.8, a figure in line with his role and responsibilities.

In Denver, Afflalo was free to camp in the corners and wait for the likes of Ty Lawson, Chauncey Billups, J.R. Smith, or even Carmelo Anthony to find him; he played more often off the ball, in other words.

In Orlando, the situation has changed. He's frequently Orlando's best wing player, which fact indicts the Magic's roster more than it does Afflalo's own skill level. Now he's the guy having to beat opponents' best wing defenders off the bounce in order to create his own shot. His usage rate of 22.6 is by far the highest of his career, and his 52.7 percent True Shooting mark is his lowest since his rookie season. He's also not given the luxury of camping in the corners, as the data in the chart below show: 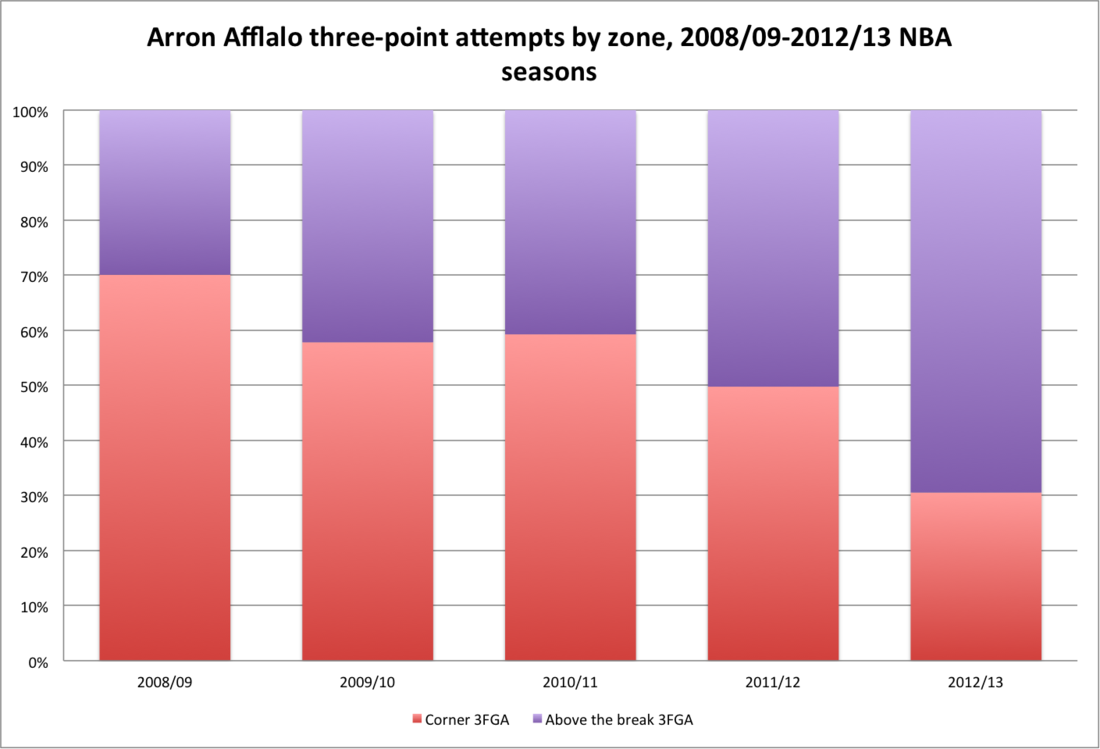 As Afflalo's career has progressed, he's taken on a more active role offensively, to the detriment of his efficiency but to the growth of his all-around offensive game.

It's fair to deem Afflalo's season a disappointment. It stretches fairness, however, to call him one of the league's most overpaid players. His contract was reasonable when he signed it, and there's no reason to believe he can't return to his earlier form as a role-playing swingman, provided he finds the right situation. In the big picture, the $24 million-plus the Magic owe Afflalo over the next three seasons won't make or break their future; Afflalo's deal isn't a cap-killing one, which factor is another one which sets it apart from his contemporaries on Forbes' list.