The Raptors center earned March's Rookie of the Month award in the East, holding off Harkless.

Watch: Harris lobs to Harkless on the break 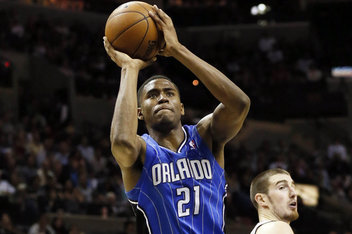 Orlando's young forwards run the fast break to perfection on this play.

In March, Harkless led all Eastern rookies in per-game scoring (13.1) and in steals (2.2) while ranking fourth in rebounding (5.6) and third in shot-blocking (0.9). He scored 18-plus points four times in 16 March games after reaching that mark just thrice in his first 52 games.

But Valanciunas was impressive in his own right; the fifth overall pick in the 2011 draft led all East rookies in per-game rebounding (7.3), in shot-blocking (1.1), and in field-goal shooting (62 percent) while ranking fourth in scoring (11.4).

Harkless' strong play continued into April: on Monday, he scored a game- and career-best 28 points on 10-of-18 shooting in Orlando's loss to the Houston Rockets. He led the Magic again in scoring Wednesday, with 18 points in a loss to the San Antonio Spurs.

The Philadelphia 76ers made Harkless, a St. John's product, the 15th overall pick in the 2012 NBA Draft. Orlando acquired his rights from Philly in August as part of the Dwight Howard trade.

Orlando hasn't had a Rookie of the Month winner since Mike Miller shared the honor with Kenyon Martin for his play in March 2001. When Miller received that honor, Harkless was a few weeks away from his eighth birthday.