An ESPN analyst believes that the 21-year-old combo guard has an uncertain future.

The Orlando Magic acquired rookie guard Doron Lamb from the Milwaukee Bucks at the NBA trading deadline, getting an inexpensive look at the Kentucky product as part of a larger package featuring Tobias Harris. What Orlando has in Lamb, however, is unclear: he's played just 60 minutes in six games with the Magic, and ESPN analyst David Thorpe sees a wide range of possibilities for Lamb. 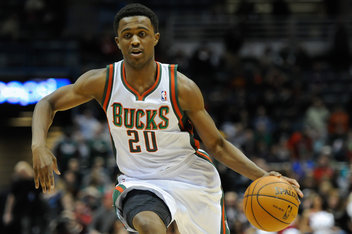 In a Thursday ranking of the league's top 21-year-old players, Thorpe declined to rank Lamb. "He could be in Europe next year, or he could be on an NBA team for a decade," Thorpe said.

Lamb has shot 3-of-14 from the floor with Orlando for 12 points and four rebounds. He played just 23 games for the Bucks and made six more appearances for the Fort Wayne Mad Ants, Milwaukee's affiliate in the NBA D-League, for which team he averaged 10.3 points in 25.5 minutes per game.

Lamb has shown flashes of ability at the NBA level, with a quick enough first step. But his lack of size makes it hard for him to get good shots off, even once he gets to the basket. The Queens, New York native shot 47.5 percent from three-point range in his two seasons at Kentucky, so working off the ball as a spot-up shooter might suit him better.

Thorpe writes that Lamb "has a lot to play for this summer," and he's not kidding: Lamb will certainly need a strong performance to close 2012/13 and a good showing in Orlando Pro Summer League play in order to solidify his NBA future, as the Magic can waive him once the season ends and only take a cap hit of about $790,000.