The former Orlando center, who said in a television interview that his Magic teams were "full of people who nobody wanted," attempted to explain himself on Wednesday.

Los Angeles Lakers center Dwight Howard raised eyebrows, and the ire of some Orlando Magic fans, on Tuesday in a television interview with CBS2 and KCAL9 reporter Kristine Leahy, during which the former Magic cornerstone said, "my team in Orlando was a team full of people that nobody wanted, and I was their leader." 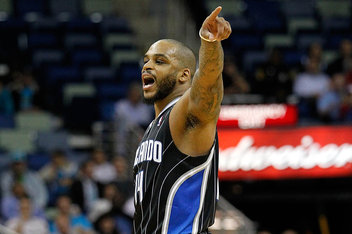 Wednesday night, after Howard's Lakers completed a 25-point comeback against the New Orleans Hornets, he attempted to explain he meant those remarks as a compliment. "It was never intended to disrespect or downgrade any of those guys," Howard said, according to Dave McMenamin of ESPN Los Angeles. "I would always tell them I wouldn’t trade them for the world."

Maybe Howard wouldn't trade them for the world, but he did manage to trade himself, in effect. Orlando dealt him, at his request, to the Lakers in August, ending more than a year's worth of drama collectively known as the Dwightmare. The trade started the Magic's rebuilding project; the team now has the league's second-worst record, but has reloaded with young players on affordable contracts.

Howard and his group of unwanted castoffs--or his lovable gang of misfits, depending on which reading of his comments you prefer--reached the NBA Finals in 2009 and the Eastern Conference Finals in 2010.