Miami and Orlando will both be without key players when they clash Monday.

Share All sharing options for: Nikola Vučević, Dwyane Wade to miss Monday's Magic vs. Heat game, according to report

The Orlando Magic and the Miami Heat meet Monday night at Amway Center, and both teams will be without key players. As John Denton of OrlandoMagic.com reports, Miami won't have All-Star shooting guard Dwyane Wade, who is suffering from a bruise in his right knee. Wade also missed the Heat's win on Sunday.

O'Quinn is key for Magic in Heat upset effort 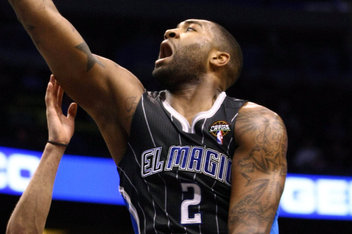 On the Orlando side, center Nikola Vucevic will miss his third straight game due to a concussion, according to Josh Robbins of the Orlando Sentinel. Kyle O'Quinn will start in his place.

Magic vs. Heat: Orlando looks for revenge against Miami