The Magic went winless on their recent four-game roadtrip.

After an unsuccessful roadtrip, the Orlando Magic return to Amway Center on Friday to take on the Oklahoma City Thunder. Tipoff is set for 7 PM Eastern on Fox Sports Florida in the Orlando market. The Orlando Pinstriped Post GameThread will appear at 5 PM in this StoryStream and on the cover. 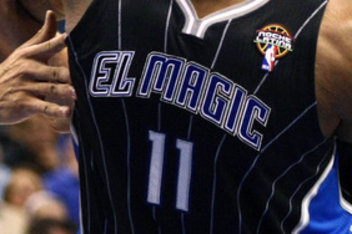 Orlando's last time out: Even without starting center Nikola Vučević, the Magic managed to control the boards and the paint in Wednesday's game against the New York Knicks. But the Magic didn't have anyone who could defend J.R. Smith or Carmelo Anthony: the duo combined for 43 points as New York swept the season series, 106-94. Andrew Nicholson had 14 off the bench to lead Orlando, while Queens native Kyle O'Quinn had 12 points and 14 rebounds.

Oklahoma City's last time out: The Thunder fell to the Memphis Grizzlies in overtime, 90-89, on Wednesday as Marc Gasol tipped in the winning basket with 0.9 seconds to play. The defeat was a bitter one for the Thunder, who had a three-point lead with 9.9 seconds left in regulation, only to watch Jerryd Bayless hit the game-tying triple and then see Durant lose the handle on the final possession of the fourth quarter.

The last meeting: On March 15th, the Magic trailed by 22 points early in the second half, but rallied to close the deficit to four with 3:37 to play before the Thunder closed the game on an 11-2 run to seal the win. Russell Westbrook and Durant combined for 50 points. Jameer Nelson led Orlando with 26 on 10-of-22 shooting.