Orlando's loss on Sunday was its second straight in which poor execution damned it down the stretch.

Share All sharing options for: Magic continue to struggle in crunch time

Each of the Orlando Magic's last four road games has gone down to the wire, but the Magic have won just one of those contests due in large part to poor play on both sides of the ball in crunch time. Sunday's fourth quarter against the Milwaukee Bucks, in which Orlando yielded 25 points to Monta Ellis and 45 points overall, was simply the latest example of the Magic bungling a close game.

According to NBA.com/stats, Orlando has played in 20 games in which the score was within two points in the final two minutes, but has won only four of those games; only the New Orleans Hornets, at 5-17, have a worse record in such games, per NBA.com. The Hornets are also the only team with a worse efficiency differential in crunch time than Orlando, which is outscored by 38 points per 100 possessions in the clutch.

Orlando and Milwaukee could replay Sunday's game 100 times and the Magic would probably win at least 90 of them; the Bucks needed Ellis to hit more threes in the final 12 minutes than he did in any single game in over two years to finish that comeback. Regardless, Sunday's game illustrated a systemic issue with the Magic's crunch-time philosophy.

The biggest reason Orlando struggles in crunch time is that it doesn't have a single player who can take his defender one-on-one and get off a decent shot. To be sure, Jameer Nelson and Arron Afflalo have tried to fill that role, but it's not working out: Nelson is 1-of-10 from the floor in the final two minutes and the score within two points, and Afflalo is 3-of-13. Nelson's mark is the worst in the league among players with at least 10 crunch-time shot attempts, while Afflalo's is sixth-worst. No other Magic player has more than six such shot attempts, and that's center Nikola Vučević; three of his six crunch attempts were tips off a teammate's miss, so it's not like Orlando is giving him the ball and having him go to work with the game on the line.

All told, Orlando is shooting a miserable 28 percent in the clutch this season, including 25 percent (6-of-24) inside the restricted area. Here's the shot chart: 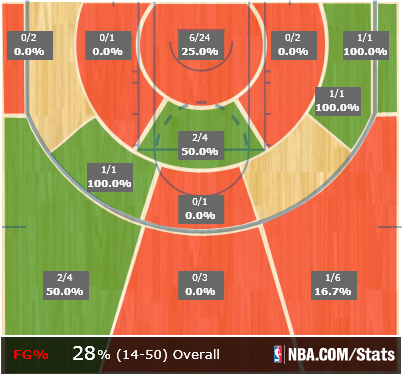 The Magic struggle defensively in the clutch as well. Orlando should not have allowed Ellis to touch the ball after he got hot in the fourth quarter on Sunday. At that point, the Magic need to embrace the mentality that they won't let that one player beat them: they have to force the ball out of Ellis' hands and make another Bucks player deliver. They didn't do that on Sunday, nor did they do it against the New York Knicks in January, when they allowed Carmelo Anthony to score 18 of his 40 points in the fourth against single coverage by Josh McRoberts.

The answers for coach Jacque Vaughn aren't as clear offensively. Nelson and Afflalo are vetereans and the Magic's best shot creators, so naturally they'll get the lion's share of the team's late-game shots. Maurice Harkless and Vučević are at their best off the ball and will probably only score on put-backs and cuts, while Vaughn hasn't really called Harris' number in crunch time yet: the second-year forward has one point and two assists in three minutes of clutch play with Orlando, but has yet to take a shot.

In a vacuum, perhaps it's not surprising that a young team like Orlando has come up empty time after time late in close games. But when one considers that it's the veteran backcourt of Nelson and Afflalo taking most of the shots, then the situation becomes more alarming.

The chart below has a complete breakdown of each individual Magic player's crunch-time offensive stats. It's sorted by descending number of shot attempts.