The Magic knocked off the Kyrie Irving-less Cavs in November.

Share All sharing options for: Magic at Cavaliers: Rebuilding teams clash in Cleveland 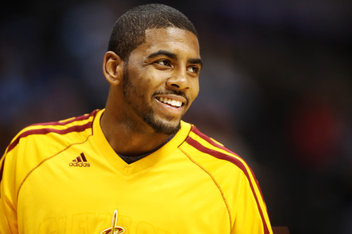 Orlando Pinstriped Post empties its notebook after the Magic's practice on Thursday.

Mired in their worst losing streak since they dropped 13 straight games from March through April 2004, the Orlando Magic visit the Cleveland Cavaliers on Friday in a matchup of two lottery-bound teams. Tipoff is set for 7:30 PM Eastern on Fox Sports Florida in the Orlando market. The Orlando Pinstriped Post GameThread will appear at 5:30 PM in this StoryStream and on the cover.

Orlando's last time out: Behind 18 points from Jameer Nelson, the Magic built a two-point halftime lead against the Los Angeles Clippers on Wednesday, only to watch that lead evaporate as L.A. took command with a 24-13 third quarter. Nelson went scoreless in the second half. Injuries held Arron Afflalo and J.J. Redick, the Magic's two leading scorers, out of the game, though Afflalo is expected to return to the lineup Friday.

Cleveland's last time out: The Cavs dominated the Charlotte Bobcats, 122-95, at home on Wednesday, a game which they led by a 100-67 margin after three quarters. All-Star point guard Kyrie Irving scored 22 to lead five Cavaliers in double-figures. Recently acquired big man Marreese Speights had 11 points and 10 boards off the bench for Cleveland, which prevailed despite allowing the Bobcats to shoot 46.8 percent from the floor.

The last meeting: Orlando edged the visiting Cavaliers, 108-104, at Amway Center on Black Friday. Nelson scored 22 points in that game, while Afflalo had 19 and Redick added 18 off the bench. The Magic led by just one point with 47.9 seconds to play, but Redick found Nikola Vučević for a layup at the 32.3-second mark to boost the home team's lead to three points. Redick went on to hit eight free throws in the final 21.9 seconds to seal the win. Rookie Cleveland guard Dion Waiters scored 25 points to lead his team. Irving did not play.