Milwaukee has set its sights on the veteran shooting guard.

Share All sharing options for: NBA trade rumor: J.J. Redick a "major target" for Milwaukee Bucks, according to report

Orlando Magic shooting guard J.J. Redick is in high demand as the NBA trading deadline of Thursday at 3 PM Eastern approaches. Adrian Wojnarowski of Yahoo! Sports reported Monday evening that the Milwaukee Bucks are one team interested in Redick, referring to the Duke product as "a major target for them."

However, the Bucks need to surmount several obstacles before acquiring Redick. As Wojnarowski notes, any team hoping to lock up Redick for the long haul must suss out their chances of being able to re-sign the free agent-to-be. 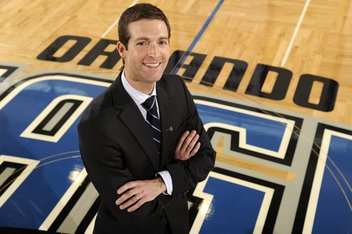 Follow all the trade rumors surrounding the Magic in this StoryStream.

There's also the matter of meeting the Magic's asking price. A report Tuesday indicated that Orlando's demands for Redick are "steep." Redick himself said February 10th that Orlando is not "actively trying to move me."

Milwaukee must also free playing time for Redick. Monta Ellis, its current starting two-guard, is likely to test free agency in July. If the Bucks trade him before Thursday's deadline, they'd be able to offer Redick the chance to start full-time if he were to re-sign with them. Wojnarowski's report suggests that Moving Ellis or point guard Brandon Jennings would strengthen the Bucks' bargaining position.

Marc Stein of ESPN first reported the Bucks' interest in Redick on February 9th. Wojnarowski's latest update indicates that their interest is serious.