Orlando's coach said Saturday that he may instruct his players to intentionally foul the former Magic big man Sunday in Houston. Orlando Pinstriped Post wonders if that strategy ought to be in play.

The Orlando Magic are willing to intentionally foul Houston Rockets center Dwight Howard on Sunday in order to force him to shoot free throws, coach Jacque Vaughn said Saturday, as Josh Robbins of the Orlando Sentinel reports. The Magic and the Rockets tip off Sunday at 7 PM Eastern.

How to eliminate intentional fouls from the NBA 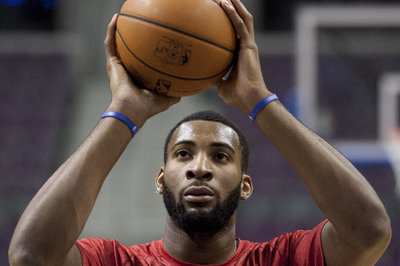 "As a coach, that's part of preparation," Vaughn said of the so-called "Hack-a-Howard" tactic, according to Robbins. "So, will that be in our toolbox? Yes. Will it get used? It depends on the situation."

Vaughn has shown a willingness to foul Howard in the past. In two games Orlando's played against the career 58-percent foul shooter since Vaughn took over as the Magic's coach, Howard has taken a whopping 60 free throws, including an NBA-record-tying 39 in a Los Angeles Lakers victory over Orlando on March 12th. Overall, Howard is 34-of-60 (56.7 percent) from the foul line in two games against the Magic since leaving them via trade to L.A. in August 2012.

With Howard and James Harden, the Rockets own one of the NBA's most potent offenses: through Saturday's games, only the Portland Trail Blazers average more points per 100 possessions than Houston, which tallies 108.3, according to NBA.com/stats.

Going strictly by the numbers, playing Houston straight-up is a sounder strategy than sending Howard to the line.

As Howard is a 56.1-percent foul shooter in 2013/14, a possession which ends with him taking two foul shots is worth, on average, 1.12 points. Thus, going strictly by the numbers, playing Houston straight-up is a sounder strategy than sending Howard to the line.

Intentionally fouling Howard has the potential to disrupt Houston's offensive rhythm and to frustrate the seven-time All-Star, who has drawn sharp criticism for the ease with which he loses focus throughout his career. On the other side of the coin, intentionally fouling also has the potential to gift Houston points and put Orlando's bigs in foul trouble.

Regardless of Vaughn's strategy Sunday, there is some pressure on Orlando to win: it's dropped its last four games and eight of its last 10 overall, slipping to 12th in the Eastern Conference.

If you were in Vaughn's position, how would you defend Howard? Please vote in the poll embedded in this post.