The ESPN personality said Friday that the team is "in the best shape of any Eastern team not named Indy or Miami."

In a Friday column about the NBA's Eastern Conference at Grantland, ESPN writer Bill Simmons heaped praise on the Orlando Magic and general manager Rob Hennigan. The Book of Basketball scribe said Orlando is "in the best shape of any Eastern team not named Indy or Miami" because of its combination of "cost-effective assets, draft picks and cap space."

Is Rob Hennigan the next Sam Presti? 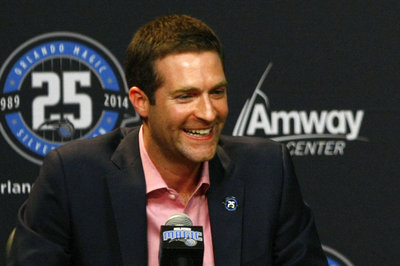 Orlando, which fell to 6-13 on Friday following a 38-point loss to the New York Knicks, now owns the league's seventh-worst record. But Simmons believes the Magic's future is bright, given Hennigan's haul from the August 2012 trade of franchise center Dwight Howard, a deal which Simmons says is the first in league history in which a team got "100 cents on the dollar" for a "superstar" player.

If anything, Simmons says, the Magic might be too competitive for their own good, given the surprisingly strong play of Arron Afflalo, one of the pieces Hennigan acquired in the Howard deal. But Simmons sees Orlando " happily missing the playoffs" for a variety of reasons which he outlines in his story.

How do you feel about the Magic's future and Hennigan's work in crafting it? Do you agree that Orlando's core--which includes Afflalo, Victor Oladipo, Nik Vučević, and the cache of Draft picks the Magic obtained in the Howard trade--is one around which the team can build?