Jameer Nelson could return to the Orlando Magic's lineup Friday against the New York Knicks, as the starting point guard practiced with his team Thursday, reports John Denton of OrlandoMagic.com. A sprained left foot has sidelined Nelson for the Magic's last three games, during which stretch Orlando is 1-2. 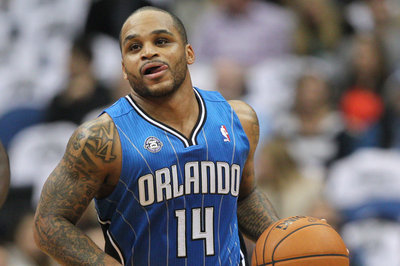 On Friday, Nelson addressed the media to discuss his injury.

Nelson, 31, is averaging 11.7 points, 3.5 rebounds, and 6.1 assists per game on 37.3 percent shooting. In his absence, Victor Oladipo has shifted from starting shooting guard to point guard. That move has paid dividends: Oladipo is averaging 18 points, 6.7 rebounds, 4.7 assists, and 2.3 combined steals and blocks.

Denton also reports that starting center Nik Vučević, who missed Tuesday's loss against the Philadelphia 76ers, was scheduled to practice Thursday and could play against New York.

The Magic and the Knicks tip off Friday at 7:30 PM Eastern. Fox Sports Florida and ESPN 580 AM will have coverage in Orlando.