In this Tuesday's column, we talk about Oladipo's turnovers and nod toward the work Afflalo has done so far this season.

It's not easy to watch Victor Oladipo play point guard. It takes a sort of patience, a fortitude and understanding that, over time, it's going to get better--it has to get better. It also takes the knowledge that this isn't a long-term plan. That's becoming more apparent as the season wears on. I mean, it can be the long-term plan, but why would it be? Especially when Oladipo is considerably better playing off the ball.

As a lead guard, he's hesitant, unsure of his ball handling, and dubious to moving the ball. He holds onto the rock for long periods at a time as it takes him much too long make his reads. ESPN Insider's Tom Haberstroh published an article bringing to light the NBA's biggest ball hogs. Oladipo tied for third on the list, as he possesses the ball for 7.2 seconds between passes. That doesn't make Oladipo a "ball hog" in the sense that he's unwilling to pass or is more apt to jack up unnecessary shots; it means that he is holding the ball too long in the offense because he is unsure of where to go with his passes.

Often he telegraphs those passes right to the arms of awaiting foes. And it's not just the passing that has lead to Oladipo's 23.7 percent turnover rate; there's also continued issues with how high he dribbles. He's consistently pick-pocketed because the ball takes so much time from his hand to the floor and back to his hand again.

We didn't really expect Victor Oladipo to successfully play the toughest position on the floor in the first month of his NBA career, did we?

But that's kind of the point, no? We didn't really expect him to successfully play the toughest position on the floor in the first month of his NBA career, did we? This season was never going to be easy for Oladipo as he plays a position he's never played against the best athletes he's ever played against on a nightly basis. For Orlando, this isn't a year of championship hopes. Letting Oladipo work through his mistakes at point does not hinder the Magic's long-term plan and the hope is that it helps the rookie's development as a playmaker.

The good news is that he's been markedly better playing as a two guard, the position I suspect he'll slide back to once Orlando finds its point guard of the future. With Jameer Nelson on the court, per NBA.com/stats, Oladipo's offensive rating jumps from 93.2 to 103.5. The defense is nearly five points worse with the Nelson-Oladipo pairing, but the offense is so much better and good enough to earn a positive net rating (1.6). Oladipo is shooting the ball more effectively playing alongside the veteran point guard. His True Shooting percentage, 54.1, is nearly five percent better with Nelson on the floor, again via NBA.com/stats.

What that means is that Oladipo is, as we thought, much better playing shooting guard. And that's totally OK. The issue here would be if he never got a chance to play his more natural two spot, but that hasn't been a problem. Oladipo has played about 40 percent of his minutes alongside Nelson, with the rest coming in Nelson's absence via injury or while the vet is resting on the bench.

Oladipo is at his best on the defensive side of the ball. He besieges opposing ball handlers with a rare combination of constant energy and world-class athleticism. If this were NBA 2k14, watching Oladipo play defense is like turning your coaching settings to "Constant Pressure" and letting your guys relentlessly attack ball handlers all over the floor. Just watch how much ground he covers in this closeout on Danny Green:

Oladipo digs down on Kawhi Leonard on the right block and still recovers to Green on the left wing. He doesn't overshoot the play, either. He closes out just hard enough to run Green off the three-point line and recovers enough to not get beat off the dribble.

On the ball, Oladipo is constantly poking at the ball and bodying up opponents, using his extremely fast lateral foot speed to stay in front of even the quickest of guards. Opponents have shot just 16.7 percent against Oladipo in isolation situations, per mysynergysports.com, which is phenomenal. He is averaging nearly two steals a game and making opponents completely miserable And it's been a lot of fun to watch.

Oladipo's offense is a work in progress and it likely will be for the next few years. And that's OK. The turnovers are an issue but they're fixable. In the meantime, the Magic will live with his growing ability off the ball and his work as a premium defender. 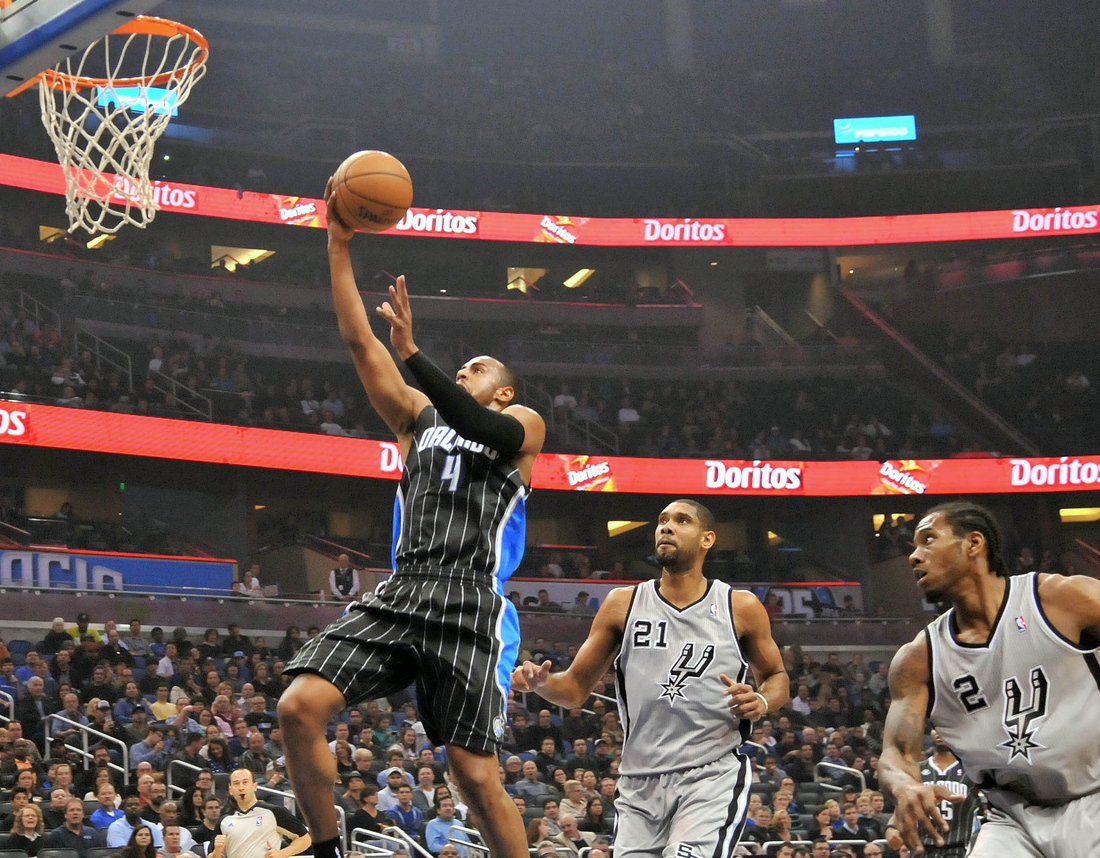 Change doesn't come easy. It's often locked inside the corners of stubborn minds unwilling to realize that they must have the ability to adapt to a different set of circumstances. That goes with life; wherein some people are unable to deal with an unstable whirlwind of precedence, instead choosing to latch themselves inside their own comfortable barriers. It goes in basketball, too; where guys are thrown into bad situations and unable to acclimate accordingly in order to prolong their career.

A number of players--Derrick Williams and Thomas Robinson, to name a couple--are drafted to flawed organizations that are unable to cater to their basketball needs. Some players are located on teams where the roster construction can clutter their own identities--think of Ömer Aşik, who sulks on the sidelines as Dwight Howard takes over command as the team's featured big. There was a real chance that this narrative could have drove Arron Afflalo's career in Orlando.

Afflalo was once a comfortable role player in Denver. He was categorized--and excelled--as the prototypical 3-and-D player who ran the wing in transition, knocked down open jumpers in a high-paced offense, and guarded the opposing team's best wing player. But he was awkwardly placed as the go-to offensive player upon his arrival in Orlando. The Magic lacked offensive creativity and Afflalo was forced to create off the dribble and in the post, tasks he was unable to fulfill in his first year with the team. His efficiency dropped and he became the scapegoat of fans looking for someone to blame: "THIS is what Orlando got in return for the league's best center?"

It would have been easy for him to give up. Orlando chose a shooting guard, Afflalo's natural position, with the second overall pick in 2013 and many were calling for Afflalo's head. Why keep Afflalo if he's cluttering backcourt minutes for Oladipo? Why not trade him for pennies on the dollar to open up playing time for the rookie? It would have been convenient for him to blame his circumstances for the plateauing and consequential downfall of his professional career. But that's not what happened. And Orlando is better for it.

Afflalo has contributed 2.2 Win Shares through 17 games, already more than he produced in 64 games last year.

This summer, he logged his workouts on his website and talked about how he was working to become a more efficient all-around player. The results, thus far, have been tremendous; this season has been, by far, the best of his six-year career. He's putting up All-Star numbers--21 points, 4.4 rebounds and 4.2 assists per game--and has contributed 2.2 Win Shares through 17 games, already more than he produced in 64 games last year.

At this point, Afflalo has increased his trade value so high that it'll take quite a haul for the Magic to export him elsewhere. It's going to take, at least, a first-round draft pick to pry him from Magic GM Rob Hennigan's hands and, at this rate, it's reasonable to wonder if Orlando doesn't look at him as a long-haul type of guy. He's 28 years old, but if the team isn't going to receive equal or more value, then why trade him? That's bad business.

There's really no telling what Hennigan plans to do with Afflalo. But if he does decide to trade Orlando's leading scorer, it's pretty clear that the Magic will receive much more value for him than they would have a year ago. That's a testament to Afflalo's hard work. He's been physically and mentally tough enough to not let a bad situation in Orlando write the narrative of his NBA career. And that's something Magic fans can appreciate.