The Orlando Magic continued their impressive play of late Sunday against the Atlanta Hawks, picking up a 109-102 victory for their second straight win at Amway Center. Arron Afflalo scored 21 points on 7-of-10 shooting with seven assists, while Victor Oladipo scored 15 off the bench to go with eight assists and two steals.

"Good to see us getting out in transition," coach Jacque Vaughn said after the game, "but it all started with us sharing the basketball and playing defense."

Orlando set a season-high with 30 assists on Sunday, so playing unselfishly indeed factored into its win.

Here's a look at the stories that developed Sunday.

For the second consecutive game, the Magic looked to push the ball off turnovers and missed opponent shots, hoping to generate easy buckets in transition. And for the second straight game, it worked to great effect: Orlando scored 22 fast-break points on Sunday, shooting 9-of-9 from the field in those situations.

"That's what you want: you want to be able to dictate what goes on." Jacque Vaughn on the impact of running in transition

"It's very important," Vaughn said of his team's willingness to push the tempo. "I think it puts the opposing team on their heels. That's what you want: you want to be able to dictate what goes on."

"When we are in a good defensive rhythm, and we're getting stops and getting rebounds, we gotta push that ball down the court and get easy baskets," Afflalo said. He added that the Magic too often let their poor defense affect their offense by leading to bad shots in half-court sets, further underlining the need to run at every opportunity.

Afflalo seemed to indicate the Magic might be turning a corner with their last two victories.

"[In losses], it always feels like we're right there, and then something happens and we end up losing. It's like our margin for error is just so small," said Afflalo. "Anytime we made a breakdown or had a team go on a run against us, it's like the game out of hand. With that in mind, it's not like we're getting beat handily. We were always in games."

The veteran swingman has a point: though Orlando entered Sunday's win with a 9-20 record, it had the point differential of an 11-18 team; Orlando had played better than its record would indicate. Now, said Afflalo, the Magic must continue to build good habits which could mean the difference between victory and defeat. He specifically pointed toward toughening up mentally and continuing to share the ball.

Point guard Jameer Nelson, who finished the game with 10 points and a team-high-tying eight assists, agreed with his teammate in the starting backcourt.

"It's a process to learn how to win," Nelson said. "You don't just put a team out there and you won't win. You have to learn the course and stay the course when things get tough for you and you have those bad nights offensively. You have to rely on your energy and your defense. Lately we're shooting the ball well and our defense has been there for us, for the most part, in those games."

Starting small forward Tobias Harris entered Sunday's game shooting 3-of-23 from three-point range, a worrisomely low 13 percent. He came up in a big way against Atlanta, doubling his season trey output by going 3-of-6 from long range in the Magic's win. His final three, which shot he made at the 9:13 mark of the fourth, put Orlando ahead by four points as the Hawks had rallied back.

"It's just gonna come with time and patience," Harris said of his heretofore wayward three-point stroke. "[In the] first half, it wasn't really falling, and I just had my mind set that I was gonna make the next shots that I take, so that's good confidence for me going forward. The shots are gonna fall. It's gonna come."

That confidence paid off: after going 3-of-9 in the first half for seven points, Harris recovered in the second by shooting 4-of-6 for 10 points.

The former Volunteer is indeed showing signs of returning to form after missing 21 of the Magic's first 22 games due to a high-ankle sprain: in the Magic's five-game homestand to date, Harris has averaged 16.4 points on 55.1 percent True Shooting. 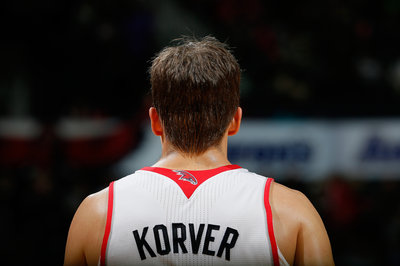 With his three-pointer at the 9:52 mark of the second quarter, Hawks swingman Kyle Korver extended to 100 games his NBA-record streak of consecutive games with a trey.

Though Atlanta hit 15 treys on the night, Korver accounted for just two of them, and only the first one came against Orlando's set defense; he hit his second triple on an offensive rebound, with the Magic still scrambling to find him.

The Magic have defended Korver well in the 2013/14 season: he's averaging just 8.3 points per game in three games against Orlando, shooting 5-of-15 (33.3 percent) from beyond the arc.