The Orlando Magic took to the Amway Center practice floor Saturday to prepare for Sunday's game against the Atlanta Hawks, the third meeting between the two Southeast Division rivals in the 2013/14 season.

Oladipo progressing at the point

Magic rookie Victor Oladipo scored 16 points with a career-best 11 assists in Friday's victory against the Detroit Pistons. Orlando has famously played Oladipo, a shooting guard in college at Indiana, at point guard in his first pro campaign, with mixed results: he's averaging 3.6 assists per game, but is also posting 3.2 turnovers with a field-goal percentage of 39.8.

"A lot of people think I shouldn't be playing it or that I can't play it, but that's fine." Victor Oladipo on playing point guard

"From the jump, I felt like it was a challenge that I could face and that I could overcome," Oladipo said of the transition to point guard. "[There's still a lot of things I need to work on, but I'm just gonna continue to keep improving. A lot of people think I shouldn't be playing it or that I can't play it, but that's fine."

Oladipo mentioned decision-making, changing speeds, and his jumper as three specific areas in which he wants to improve, but emphasized that he's looking to get better regarding "everything" about his game.

The point about changing speeds is important, as Oladipo said Friday he's having to adjust to playing at NBA speed, particularly coming off screens; he said then that he doesn't have to play every possession at "100 miles an hour." Coach Jacque Vaughn touched on that point before practice.

"You don't want to play at one speed the entire game," Vaughn said. "I think you see the best players throughout this league, they play at different paces throughout the course of the game."

Oladipo feels the tension between using his quickness--one of his best athletic traits--to gain an advantage but also not rushing the choices he makes when running the offense.

"There's always opportunities to play fast," Vaughn said. "It doesn't mean your decision-making has to be fast. Those things can slow down internally in your brain and what situation's in front of you."

In addition to varying speeds, Orlando's coach said that Oladipo continues to incorporate different dribble moves into his game to keep defenders off balance.

While there's plenty left for Oladipo to accomplish, Vaughn says that the rookie's attitude will help him progress.

According to Oladipo, he developed that attitude while he prepared for the NBA Draft. "There's a lot of ups and there's a lot of downs, but I just had to be the same person every day because I had to look at the bigger picture," he said.

The bigger picture could include more full-time minutes at point guard, as Vaughn has begun playing Oladipo without other initiators in recent games. "I've always said that we'll continue to challenge guys and their games and this is, at this present moment," he said of that choice, "the next step for him."

The case for Jeff Teague 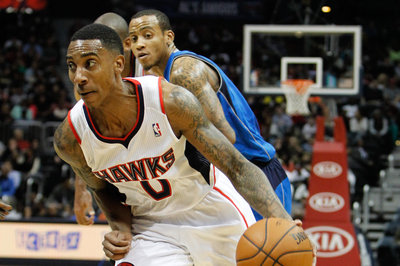 Atlanta point guard Jeff Teague ranks as one of the league's most-improved players, and Orlando is focused on shutting him down in Sunday's game, and it's easy to see why: in his last two games, Teague is averaging 30 points and 11 assists on 54.5 percent shooting. Overall, the Wake Forest product is posting per-game averages 16.8 points and an Eastern Conference-leading 8.2 assists per game.

"He has definitely one of the most imporived players in this league," Vaughn said. "His ability to create offense for himself and get in the lane [and] make the right decisions... he's been really good this year."

Orlando limited Teague to 15 points on 4-of-11 shooting in its last game against Atlanta, a 17-point win for the Magic, but Teague popped off for 19 points and 13 assists in an Atlanta victory against the Magic earlier in the season.

"He can affect the game in different ways," Oladipo said. "We're gonna have to do a great job of slowing him down."