Magic want Kyle O'Quinn to take "the next step"

The 23-year-old big man has already made big strides since the Magic drafted him in 2012. Now they expect him to improve even more.

Share All sharing options for: Magic want Kyle O'Quinn to take "the next step"

O'Quinn, the Magic's second-round Draft choice in 2012, has "got some ground to make up," Vaughn said, referring to the fact that the Norfolk State product began playing basketball much later than most professionals do. 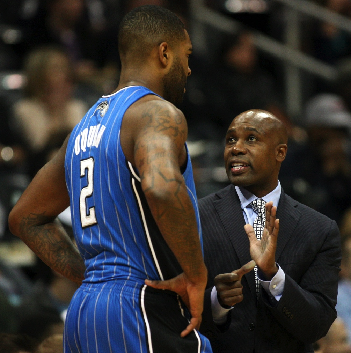 "The first time I played seriously and organized was college," O'Quinn said Thursday. He tried out for his high school team in 11th grade and made the squad, but rode the bench that year and didn't see playing time until his senior year.

How can the former Spartan make that "next step"? According to Vaughn, it's pretty simple: "I think he just needs to continue being around the game," the coach said. He highlighted one possession against the Sacramento Kings on Saturday when O'Quinn got an offensive rebound, found himself trapped under the hoop, and then missed a putback layup attempt after offering a few fakes. With more "game experience," Vaughn said, O'Quinn will read such situations better.

Glen Davis, whose locker is adjacent to O'Quinn's, said Thursday that he needs to play more consistently.

"Everybody tries to master it and it's one of the hardest things," Davis said. "The guys that understand and try to get as close to consistency as possible, I think they become great at this game."

O'Quinn's first season-plus as a pro has helped him adjust to the NBA game. "Just being more comfortable on the court," O'Quinn said when asked about where he's made the most improvement in his young career. "The speed of the game, the athleticism, the size of the players overall. Knowing what you gotta do over and over again, I think I've become more comfortable with that."

His teammates have noticed a change as well. Davis addressed that subject.

"He's matured in a way and is establishing himself as a pro," Davis said. "He's got a ways to go, but he's a young guy who didn't start playing basketball until high school." According to Davis, O'Quinn still needs to pick up some "fundamentals" and "little things," but he has confidence that O'Quinn will do so.

Despite his late start and the room for improvement, O'Quinn has already shown great ability as a passer out of the high post. Over the last two seasons, only five centers have a better assist percentage than O'Quinn's mark of 12.3, according to basketball-reference.com figures. O'Quinn has earned Vaughn's trust as a playmaker.

"That just came from me just being a kind of a guy that wants to make everybody around them better." Kyle O'Quinn on developing as a passer

"If I was drawing up an ATO [after timeout play] at the end of the game and had the chance to put him in, he would make the pass," Vaughn said. "He's fearless, and he can really pass the basketball. It's just instinctive."

Davis also trusts O'Quinn to make the right reads as a passer. "He's done a great job of really showing he can pass the ball and get other guys involved," he said.

O'Quinn's mentality helped him develop as a passer. "That just came from me just being a kind of a guy that wants to make everybody around them better. It was just an instinctive thing," O'Quinn said of his playmaking ability. "To stay on the court, you have to do your job. Plus, it also helps if you help the leading scorer get a couple points."

For now, O'Quinn has to scrap with Jason Maxiell for big-man minutes behind Nik Vučević, Davis, and Andrew Nicholson. If Vaughn's remarks Monday are any indication, he'll continue to get plenty of opportunities to prove himself and grow his game.