NBA trade rumor: Bobcats possibly willing to trade for a swingman, according to report

A report indicates that Charlotte, thin at the wing positions due to injuries, might be amenable to a trade for an upgrade.

Share All sharing options for: NBA trade rumor: Bobcats possibly willing to trade for a swingman, according to report

Though the Charlotte Bobcats own the East's sixth-best record at 13-15, injuries have cast a pall on their surprisingly strong season: gadget forward Michael Kidd-Gilchrist will reportedly miss at least four weeks with a broken left hand, while small forward Jeffrey Taylor is set to miss the duration of the season owing to a ruptured right Achilles' tendon. Grantland scribe Zach Lowe tweeted Sunday that Charlotte could be in the trade market to bolster its rotation of perimeter players.

"If I had a wing I wanted to flip for future assets/picks," Lowe writes, "I'd be on the phone to Charlotte today."

The Bobcats don't have many expendable young prospects--unless one is interested in the raw, 22-year-old big man Bismack Biyombo--but they do own 2014 first-round Draft picks from the Portland Trail Blazers and Detroit Pistons. While neither pick figures to be in the lottery, the depth of the 2014 Draft class makes mid-to-late first-rounders even more valuable than usual. 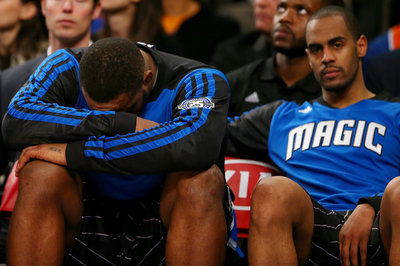 If they're interested in adding to their collection of assets at the expense of wins in the short-term, the Orlando Magic could potentially offer Arron Afflalo to Charlotte in a trade package for such an asset. The veteran swingman ranks 10th in the NBA in scoring, posting 21.8 points per game to go with 4.6 rebounds and 3.9 assists.

Though valuable to the Magic, Afflalo's status as a productive veteran with a fair contract on a rebuilding team has made him a popular subject of trade discussion among the team's fans. The Magic themselves have given no indication that they're open to trading Afflalo, though trade rumors linked him to the Los Angeles Clippers over the summer. On Monday, ESPN Insider Chad Ford wrote that Orlando was "right" not to trade Afflalo then and speculated that he "might land the Magic another asset (a young player or a draft pick) that they covet."

With a tip of the hat to Orlando Pinstriped Post reader The BBQ Chicken Madness, via Twitter.