The Magic managed just 42 second-half points in their loss to the Kings Saturday.

The Orlando Magic fell to the Sacramento Kings, 105-100, on Saturday for their 10th loss in their last 12 games. Orlando's offense fell into a rut after halftime, as it shot just 43.6 percent from the floor for 42 points, with 12 turnovers, in the second half.

Orlando carved up the Kings for a season-high 58 first-half points, but the tenor of the game changed after intermission, as I mentioned above. That change came as a surprise, given that Sacramento entered the game ranked 27th in the league in points allowed per possession.

"I think we gotta keep moving the ball," power forward Glen Davis said. "Moving the ball and getting each other open. We did that in the first half and we got away from it." Several of Orlando's second-half possessions devolved into one-on-one play with little to no off-ball movement.

Vaughn, for his part, felt as though the offense functioned well in the second half.

"I think the NBA is about matchups. I think throughout the course of the night we had great movement." Jacque Vaughn on Orlando's offense Saturday

"I think the NBA is about matchups," Vaughn said. "I think throughout the course of the night we had great movement. Our motion offense is based on movement. At certain points in the game, if we have an advantage, like Andrew [Nicholson] on the box, we're gonna throw it to him. We don't need movement to throw to ball into the box and see if we have an advantage of Andrew playing against a guy we think he can score over.

"So there are going to be possessions throughout the course of the game [...] where you just throw it into your big and there isn't movement," Orlando's coach continued. "Maybe the movement is off the top and the guys are cutting off the weak side. But there's nothing wrong with feeding the ball into the post and getting some movement off of that."

"We don't have the type of player that can just get the ball and go one-on-four." Glen Davis on the Magic's need to play together offensively

Davis wanted to see more passing from his team in the second half, noting that "extra passes [and] post-ups in rhythm" led to Orlando building its first-half edge. "We have to play with each other more because nobody's an All-Star on this team. Jameer [Nelson] was, but we don't have the type of player that can just get the ball and go one-on-four."

Perhaps no Magic player takes losing harder than Afflalo. The six-year veteran minced no words Saturday when asked how Orlando can avoid a repeat of the 2012/13 season, when it posted the league's worst record at 20-62.

Afflalo is one of the few Magic players who pays close attention to playoff seeding this early in the season, and he's keenly aware of where Orlando stands in the moribund East.

"We haven't been playing well overall, from a win-loss perspective, but the reality is that we're four or five games out of a comfortable spot in the playoffs," Afflalo said. "If that's what this season calls for, that's how I'm gonna approach it. It won't get out of hand."

"We just gotta keep grinding," Nelson, another of the team's veteran leaders, said when asked about how the Magic can avoid letting the season slip away. "When you hit a little rough patch, call it adversity, and you have to figure a way to get out of it as a team. It can't just be one person trying to do it because that's not how you win and that's not how you lose."

Tobias Harris, who scored a season-high 21 points in the loss, agreed with Nelson's message of unity. "For us, as a team, to make the next step and get where we need to be at, we're gonna have to be a little bit stronger mentally when teams make runs."

Saturday's loss was the Magic's fourth straight at home, their worst losing streak at Amway Center since they dropped seven straight from February 13th-March 8th, 2013. Before tipoff Saturday, Vaughn said there was one common factor in the Magic's recent home losses.

"If there's one simple thing, it's that we haven't made shots," Vaughn said. "I think at the end of the day, that's what it boiled down to."

Orlando has averaged 93.3 points per game in those four straight home losses, shooting just 41.7 percent from the floor overall.

Vaughn said his team had played "decent" defensively during this home skid. 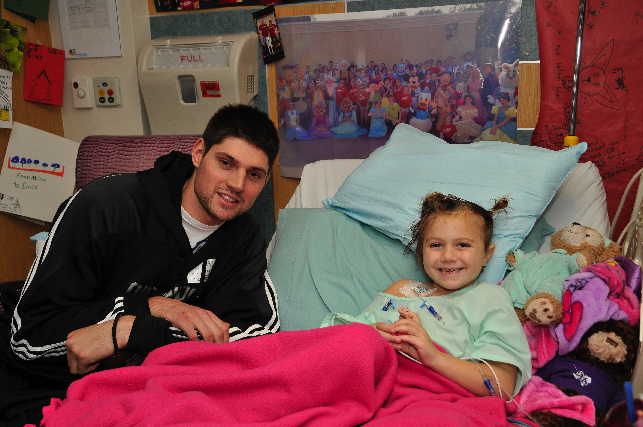 One day after Davis and Nicholson took some Boys & Girls Clubs kids on a holiday shopping spree, the Magic continued to give back to the Orlando community this holiday season by sending four players to the Walt Disney Pavilion at the Florida Hospital for Children.

Nikola Vucevic, Harris, Solomon Jones, and Victor Oladipo visited the pediatric unit Friday to sign autographs, pose for photos, and give gifts to the patients. Community ambassadors Bo Outlaw and Nick Anderson, as well as Stuff and the Magic Dancers, joined them.