Magic vs. Kings: Previewing the game with Sactown Royalty

Orlando Pinstriped Post chats with Sactown Royalty before the Magic's game against the Kings on Saturday.

Share All sharing options for: Magic vs. Kings: Previewing the game with Sactown Royalty

To better grasp the Orlando Magic/Sacramento Kings game Saturday night and to understand Sacramento as a team a little more thoroughly, I caught up with Greg Wissinger of Sactown Royalty. Greg is an associate editor of StR and a contributor to SB Nation's homepage. You can (and should) give him a follow on Twitter. 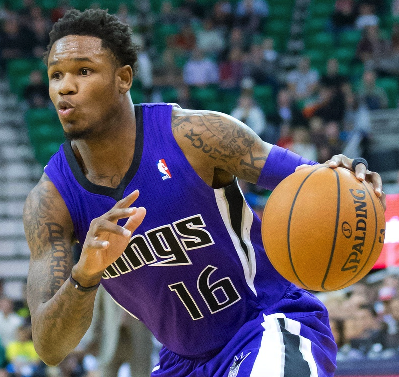 Greg Wissinger, Sactown Royalty: McLemore has shown flashes of greatness, but has struggled overall. I'm not worried about him long-term, he's just a very raw prospect. He's great at moving off the ball, and even though his shot has struggled I remain impressed with his shooting motion. His struggles are largely due to him being thrust into a starting role thanks to the ineptitude of Sacramento's other shooting guard options.

OPP: DeMarcus Cousins received a fat extension this summer and has rewarded the organization with his best professional season. He's--in my opinion--making that leap from borderline to All-Star player. Where does he improve from here?

StR: DeMarcus has been great this season. He's been the Kings best player week in and week out. It's been a really impressive improvement from last year. He still needs to keep working on defense, though. He needs to get a lot better defending the pick and roll, and he needs to rotate better.

OPP: So, we have to talk about Rudy Gay. The Kings took quite a bit of heat for swallowing his deal, but on the other hand he's a way better option at small forward than John Salmons. Can this thing work? What are your thoughts on fit thus far?

Rudy Gay really struggled as the main guy in Toronto, but in a secondary or tertiary role with Sacramento he's been great.

StR: So far the fit has been great. Aside from his contract, the other big knock on Gay was his shooting. He really struggled as the main guy in Toronto, but in a secondary or tertiary role with Sacramento he's been great. In 5 games with the Kings he's shooting 53% from the floor, and has shown a real knack for getting to the rim. The problems in Sacramento have not been with Gay.

OPP: If I created an arbitrary list of my favorite players to watch in the NBA, Isaiah Thomas might find himself atop. Is he the kind of guy who can start on a championship team? Also, I'm sure the Kings have no interest, but where do you gauge his trade value right now?

StR: I've given up trying to gauge Isaiah's ceiling, because every time you think he can't continue to surprise you he finds a way. I think he could be a point guard on a championship team, but it would depend on the roster around him. He still struggles on defense, so you'd need to have a team and scheme in place to protect him from that. But there have been plenty of successful teams built around point guards who aren't great defenders.

As for trade value, it's very difficult to project. Kings fans have no interest in trading him, but the front office probably has a price where they would part with him. I imagine the value would be pretty high. But he's entering restricted free agency this offseason, and nobody really knows what to expect in terms of a contract offer.

OPP: Switching to the Magic: if you could pick one guy from Orlando and place him in Sacramento, who would it be and why?

StR: If I could pick one guy, I'd add Nikola Vucevic. The Kings could use a defender like him, his got a ton of room to grow, and he's on a great contract. And between Vucevic and Cousins, the Kings would grab approximately all the rebounds. I don't suppose Orlando's interesting in swapping Vucevic for Jason Thompson?

Huge thanks to Greg for his time and insight. You can find him and more great Kings coverage from our friends over at Sactown Royalty.