NBA Draft 2014: Talking Doug McDermott and the other small forwards

Tyler Lashbrook and Sam Vecenie continue their discussion about 2014 NBA Draft prospects, with a particular emphasis on small forwards.

Share All sharing options for: NBA Draft 2014: Talking Doug McDermott and the other small forwards

In this week's NBA Draft email chain, Sam Vecenie and I talk about the depth of the wing position in this year's draft. Everyone knows about Jabari Parker and Andrew Wiggins, but there are a handful of other guys with the potential to start at small forward on a good team.

With that, here we go: 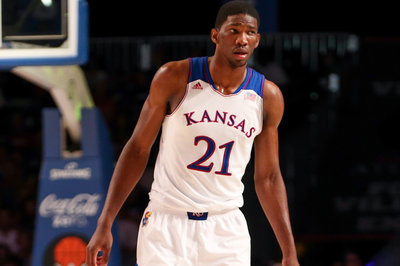 We've talked freshmen; we've talked about our top prospects; we've talked Joel Embiid and the enigma that is Marshall Henderson; but we haven't even mentioned the always great, always productive Doug McDermott.

In that regard, we're kind of like American college basketball fans. It doesn't help that McDermott plays for Creighton, but he is--for the most part--largely forgotten on the national scene. I mean, I'm not sure I've heard the Wordwide Leader mention his name this year, yet here he is, averaging the most points per game of his career and being completely awesome like always.

He's my leader for Player of the Year. What do you make of his professional potential?

Sam Vecenie: Oh wow, NPoY early leader for McDermott? I'd still probably go Jabari Parker, but that's a discussion for another day. But you're right: McDermott is without a doubt the forgotten man on the national scene this year. He's averaging 25 and 7 per night. This has been his least efficient season from the field, and he's still shooting 50 percent from the floor and 45 percent from three. The guy is probably the best jump shooter in America.

Because of that shooting skill, McDermott is always going to have a place in the NBA, even if it's simply in a Steve Novak-like capacity. His NBA hopes are going to rely on two things, I'd say. First off, can he defend anyone? He's kind of in that 3/4 tweener mold at 6-foot-8 in shoes, and probably doesn't have the foot speed to defend NBA wings. He's a really good rebounder, so maybe he can fit into that Ryan Anderson mold where he just knocks down threes and rebounds despite struggling to defend.

The second is going to be his ability to work within an offense and not stop the ball. For the last three seasons now, McDermott has been the entirety of the Creighton offense. He's averaged only about one assist per game during this time frame. I imagine that this is a much smaller issue, but it's one worth mentioning. These two question marks are going to be the difference in my mind between him being a lottery pick in the 8-14 range and the 15-24 range in the draft. If he can answer those two things by the end of the year, there's a solid chance he hits the lottery.

What do you think?

Tyler: I think the Orlando Magic struggled mightily at times to space the floor in certain lineups. There are long sequences where it just seems like nothing is falling for Orlando. Every team goes through slumps, obviously, but the Magic REALLY struggle for long, drawn-out periods, which is why they are the fifth-worst offensive team in the league. In that regard, McDermott could come in and help immediately.

Reliable, knock-down shooters manage long NBA careers. It's easier to teach a shooter his role than it is to teach a non-shooter how to shoot. Tyler Lashbrook

I am worried about his defense, because he is slow and he is a tweener. But if there's anything we're learning more and more, it's that reliable, knock-down shooters manage long NBA careers. It's easier to teach a shooter his role than it is to teach a non-shooter how to shoot.

There are some other solid wings out there, too: James Young from Kentucky, Glenn Robinson III from Michigan, Dario Šarić from Croatia, Rodney Hood from Duke, Jerami Grant from Syracuse, and Sam Dekker from Wisconsin. Do you have any favorites out of this group? Did I forget a couple whom you're more interested in?

Sam: Oh trust me, as someone who gets to watch the Cleveland Cavaliers on a regular basis, I know about poor spacing. McDermott would be a heavenly addition to the Cavs, as well as the Magic.

As far as the other wings right now, the one I've been most disappointed in so far is Robinson III. GR3 has really, really struggled this season without Trey Burke to make plays for him. He's not getting nearly as many looks at the rim off of cuts as he did last season, and his jump shot hasn't taken the next step that it needs to. His ball handling seems to have improved slightly, but it's still not quite where it needs to be. I expected his hyper efficiency to take a bit of a dip this season, but it's dropped even more than I expected with an increase in usage from 15.3 percent to 20.6 percent.

The guy who I particularly like so far from what I've seen this year is Dekker. He's improved the quickness on his jumper release (a major concern for me heading into this season), and improved his rebounding and defense slightly. Offensive rebounding was already a strength for him, but he's become much stronger on the defensive glass as well. The biggest piece for him going forward will be the midrange game. It's fairly non-existent for him, and he only shoots about 32 percent on jumpers from that range. He'll need to improve there.

Hood and Grant also look really good so far this year, with Hood looking great against Arizona and Grant matching that performance against Baylor. Who do you like out of this group?

Tyler: Dekker has a sweet last name and is a lot of fun and trust me, there aren't many Wisconsin players who are even loosely defined as "fun." Bo Ryan ball drives me absolutely insane. I guess if you like watching offenses eat up 30 seconds of shot clock, then by all means, do you. So Dekker earning a "fun" title from me is a pretty big deal. He reminds me a little of slightly less athletic Chase Budinger, with his size and shooting range.

I, uh, like James Young. He's super long and has a silky, left-handed stroke. His three point percentage is a little deflating (34.2), but I think most of that comes from a pasture green-light. He's basically the only knock-down shooter on Kentucky and, as such, is asked to jack up long shots to stretch the defense. With better shot selection, that percentage would rise. I love his footwork off screens and I love that it feels like he only shoots threes and shots at the rim. But his defense--though the potential is there--is pretty awful. Awful enough where I struggle to rationalize picking him in the top 10.

Hood is probably the most intriguing guy to me. As you know, he transferred after one year at Mississippi State, sat out last year and is balling out this season, this his first year at Duke. He started off super hot, but has regressed back to 46 percent from behind the arc. Being listed as a 6-foot-8 shooting guard is ridiculous, especially given that stroke.

How good can these guys be? These are prospects in that 15-30 range (besides maybe Young and Hood, who both have top 10 potential), yet I'm literally excited about their pro potential. Like, Grant's good, but can he be an NBA starter? Is this draft THAT deep?

Sam: How did I know you were going to go with James Young? Why should I be surprised there? But yes, you're right. Young has that Bradley Beal-esque three point shot whose percentage should improve in the NBA where he will be less counted on to space the floor. I'm not really sure that he does anything else yet, which kind of limits his value, but you're right he's definitely the new-age three that a lot of teams will be looking for.

I'd say that yes, all of these guys are potential starters in the NBA in my mind right now. They're all that good. I'm probably most down on Grant if you made me pick, but he's so athletic that it wouldn't at all surprise me if he ended up on that level. If you made me rank these guys now, I'd probably go something like:

As far as tiers, I'd say McDermott and Young are in the bottom part of my lottery. Dekker, Hood, and Robinson III are in the top 20, and Grant is right behind them. This is a HUGE small forward draft class.

We should also talk about Šarić, I guess. He's more point-forward than he is a shooting/cutting three like these guys are. The guy has excellent vision and loves the high post. I actually see him as more of a four than a three because of that in the Lamar Odom mold. He still doesn't shoot well from three-point range, doesn't have long arms, and tends to turn the ball over when he tries to do too much with it. His basketball sense is off the charts, but I think his best bet is going to be to improve that jumper and become more of a stretch four with great vision. I'd probably place him below Robinson and ahead of Grant right now, but I'll admit I've seen only about five of his games in less than ideal online feeds. He's a really tough nut to crack in this draft. Where do you have these guys ranked?

Tyler: I really like Šarić. He reminds me of a young Hedo Türkoğlu and--despite how poorly ol' Turk has aged--he was once a really good player. I think his jumper is going to be fine, I really like those mechanics. My issue is that--like with other foreign guys--I just don't know exactly how he'll translate against a new slate of competition.

This list--like other arbitrary predraft lists--will likely change as the season progresses, but that's probably mine. The crazy thing is all six of those guys can probably start on an NBA team and all have pretty high upside and you can still grab them later in the draft.

The small forward position is far and away the deepest in the draft this year, and there are many potential starters out there for the taking. Sam Vecenie

Sam: I completely agree with you. These guys can all really play. Robinson III probably has the most potential out of all of them if he can ever figure out that jump shot, but I'm not sure that I buy him as anything more than a league-average shooter at his peak.

The really crazy part is that we are through the top, what, eight or nine small forwards in the draft potentially (Parker and Wiggins included, although some of these guys best fit as fours)? We haven't even touched on guys like T.J. Warren, Alex Poythress, LaQuinton Ross, Nik Stauskas, and LeBryan Nash, who also could all end up in the first round. The small forward position is far and away the deepest in the draft this year, and there are many potential starters out there for the taking.

Now, we just need to see how conference play shakes these guys up.