Magic vs. Jazz notebook: Orlando struggles as Utah bears down

The Magic shot 32.6 percent from the floor Wednesday against woeful Utah.

Share All sharing options for: Magic vs. Jazz notebook: Orlando struggles as Utah bears down

The Orlando Magic fell to the Utah Jazz on Wednesday, 86-82, in a woeful offensive performance without leading scorer Arron Afflalo, missed the game due to illness. Rookie point guard Trey Burke led Utah with 30 points while adding eight rebounds and seven assists. Orlando shot 32.6 percent from the floor and 31.3 percent in the painted area.

Burke was the star of the game, without question, catalyzing an otherwise moribund Utah attack.

The Jazz dominated the Magic with Burke on the floor and floundered when he sat.
Data from NBA.com/stats

"I think some of his shots were in transition a little bit," Vaughn said. "A few threes were. A few of his shots came from [Gordon] Hayward's penetration, trying to keep him out of the lane. Pick-and-roll wise, he was good coming off [screens], making shots. Give him credit."

Magic rookie Victor Oladipo, who knows Burke from their days in college at Indiana and Michigan, respectively, assessed Burke's performance.

"He was just comfortable out there. When he's comfortable, he's very effective, as y'all can tell," Oladipo said. "After he hits the first few [shots], and he has a rhythm, that's all she wrote from there."

Orlando never mounted a serious challenge with Burke on the floor. That fact may attest to the lack of quality reserve point guards on the Jazz's roster, but it also signifies how much he means to this rebuilding squad.

Oladipo had one of the worst games of his young career against Utah, going 1-of-12 from the floor for three points, five rebounds, two assists, and two turnovers in 36 minutes.

"They did a good job of protecting the paint. I just gotta learn from it." Victor Oladipo on Utah's defense

Regarding his offensive struggles, the Indiana product echoed Vaughn's earlier comments about Orlando's team-wide offense as a whole.

"I just missed shots I normally make," Oladipo said. "They did a good job of protecting the paint. I just gotta learn from it."

Oladipo's only field goal was a three-pointer, and he didn't earn any free-throw attempts. Overall, he shot 0-of-5 inside the painted area, oftentimes looking first to create contact with a Jazz defender, to the detriment of his shot's accuracy.

Against Utah, Tobias Harris started at small forward in place of Afflalo. Vaughn said before tipoff that Harris will have to adjust to a new role in the 2013/14 season. The former Tennessee Volunteer starred for the Magic after they acquired him at the February trading deadline, but he did so primarily without playing alongisde Glen Davis, Afflalo, and Jameer Nelson.

With the Magic's core of veterans injured, Orlando gave Harris plenty of freedom offensively and played him mostly at power forward. He thrived in that role, leading the team with 17.3 points per game while hauling in 8.5 rebounds. This season is different.

"I think just how the basketball was in his hands, the amount of shots he had taken for us, they were a different element," Vaughn said of Harris' performance at the end of the 2012/13 season. "That's why I treat each team differently. This is an entirely different year than last year, and that was my first message to the guys going into this year."

Harris has played more small forward in 2013/14, given Davis' return to health and Andrew Nicholson's emergence as a force at both ends of the floor. But it's tough to assess his performance, given that Wednesday's was just his fifth game of the season after sustaining a debilitating ankle injury in October.

Harris tallied 14 points and 10 rebounds on Wednesday for his first double-double of the season, but he shot only 5-of-14 from the floor. He became less effective down the stretch, missing both of his shots and committing a turnover, without scoring or rebounding, in his six fourth-quarter minutes.

"I wouldn't say I was winded, but I was a little bit tired out there," Harris said. "I'm not gonna lie." 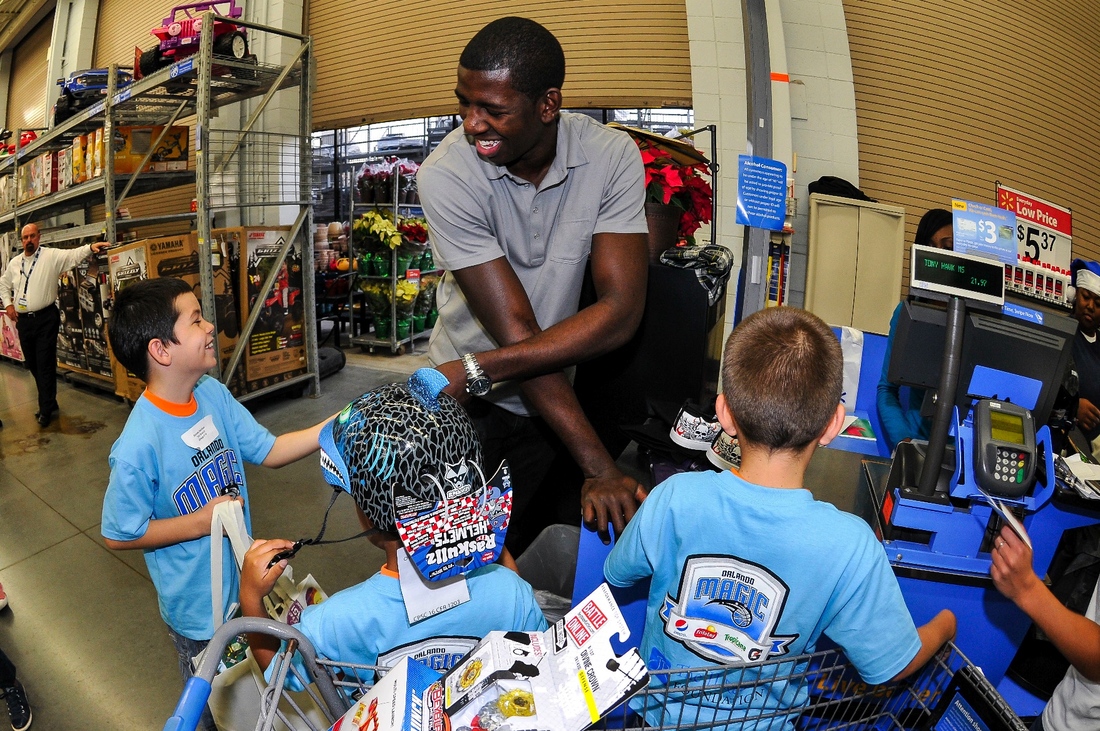 Fox Sports Florida is pitching in as well by transporting the kids to and from the event via the Orlando Magic Fan Express.

Afflalo was set to join his Magic teammates at the event, but he is now questionable to participate. The team will re-evaluate him Thursday.