In this week's column, we discuss the Magic's trade assets and where the team stands in the NBA's trade marketplace.

Each week, Tyler Lashbrook will let loose on whatever Orlando Magic subjects capture his interest. This week's column happens to coincide with an SB Nation NBA theme day focused on trades. Welcome to Ty Tuesday. - ED

NBA trade season is a weird thing. Trades rarely help all teams involved and mostly come from conniving general managers looking to improve their long- or short-term plans by swindling their fellow colleagues. Yet trade season is continuously one of the most chatted about topics of the NBA season. Trades can provide hope to hopeless fans or, in some cases, create disdain of fans of poorly managed franchises.

Those franchises, for better or worse, are typically broke down into two categories. The first group is buyers, teams looking to extinguish assets to add one or two players who will help them win now. The other group is sellers, teams uninterested in the glory of playoff appearances, instead looking to build toward the future.

The Orlando Magic fall, for obvious reasons, into the category of sellers.

The Orlando Magic fall, for obvious reasons, into the category of sellers. No one player--barring the unrealistic and quixotic scenario that Orlando can obtain LeBron James or Kevin Durant--will catapult the Magic into championship contention. The Magic do, however, have a number of movable pieces that would fit better on an another roster.

In today's column, we will focus on three key trade pieces--Arron Afflalo, Glen Davis and Jameer Nelson--as they are proven players with flexible contracts whom the Magic would most likely be willing to part with.

The Suns have shifted gears after a surprising start to the season. Far exceeding preseason projects, Phoenix is reportedly willing to part ways with a pick or two if it means getting an impact veteran. The Suns likely wouldn't actually draft four rookies anyway, so flipping a pick for a peak Afflalo makes sense. Afflalo fits their up-tempo size, provides more shooting, and immediately becomes the team's second-best perimeter defender behind Eric Bledsoe. He also drastically accelerates the rebuilding process in Phoenix. Orlando throws in Türkoğlu to make the contract situation work and, hey, maybe Phoenix has better luck working a buyout than the Magic have. 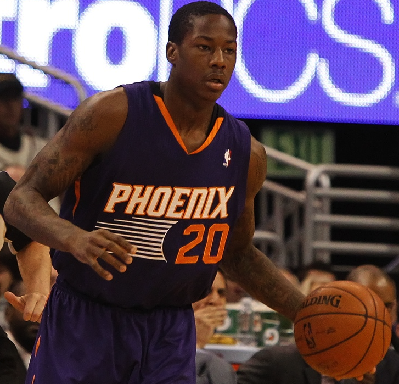 Orlando receives an injured, expiring Okafor and an intriguing young backcourt guy in Goodwin. Neither of Orlando's two guard reserves--Ronnie Price and E'Twaun Moore--figures to play too much a part for the future of the franchise, thus Goodwin becomes a young, athletic, slashing guard to bring in off the bench. The real prize is that draft pick, which I protected in this hypothetical situation only because I can't imagine many situations--unless you're the New York Knicks or Brooklyn Nets--where throwing out unprotected picks is a realistic option. In this theoretical, Orlando also sheds Afflalo's $7.5 million in the summer of 2014.

Afflalo, who has spent a large chunk of time at small forward for Orlando, slides into that position for the Mavericks. Since Dallas is trading its only real perimeter defender, Afflalo assumes that role. He becomes the third option on offense behind a rejuvenated Monta Ellis and an ageless Dirk Nowitzki, and can focus more of his energy guarding the opposing team's best player, a role that he played well with the Denver Nuggets. Only now he has the added ability to create for himself and for others when the situation calls for it.

Orlando takes back Marion's expiring contract, which it can buy out if it so chooses, and two young backcourt guys. Larkin isn't putting up eye-popping numbers in limited minutes, but he can run an offense and is immediately more exciting that Price or Moore. Ledo is a bit of an unknown, but he likes to score and Orlando gets a chance to look at him for the cheap. Dallas' 2014 pick belongs to the Oklahoma City Thunder and is protected through 2017, so Orlando gets its 2015 pick. It's not as sexy as a 2014 pick, but what can you do? Speaking of the Thunder and that draft pick... 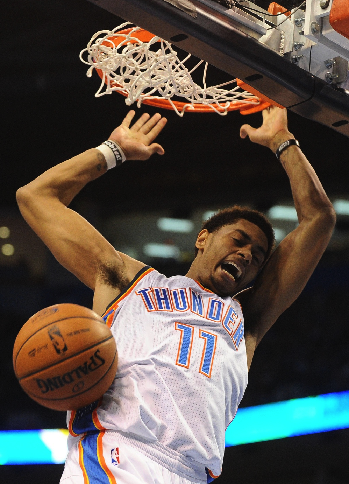 The Thunder may not want to mess with the chemistry that's building early in this season, but Afflalo is superior to Sefolosha and good enough to make up for any production that Lamb provides off the bench. Like the Dallas scenario, Afflalo moves back to the third option--maybe the fourth depending on Serge Ibaka--and becomes the team's marquee perimeter defender. He sews up any long-range shooting issues they have and boosts the Thunder's championship aspirations over the next 2-3 years.

Orlando gets the silky-smooth, long-range-shooting Lamb and Sefoosha's expiring contract. Lamb is averaging nearly 17 points per per 36 minutes, with that number potentially rising with a surge in responsibilities. He has a lot of defensive upside and placing him next to Victor Oladipo gives Orlando a ton of backcourt length. OKC adds Sefolosha to the deal to match salaries, but his expiring contract is certainly a positive. The Dallas first-round draft pick we discussed earlier goes to Orlando, immediately adding to the team's collection of assets.

Denver might be unwilling to deal Miller, who is averaging a hair over 20 minutes per game, but doing so gives them an excuse to cut the backcourt reserve rotation to Nate Robinson and Evan Fournier with the three-point shooting that Moore provides. They receive, in Davis, an upgrade to their frontcourt depth, an extra post defender and a guy who can--regardless of efficiency--score from the block. Davis goes back to his more natural reserve position and gets a chance to bully second line guys.

Orlando receives a bench guy, in Professor Dre, who can run an offense, and Arthur. It also gets a look at Quincy Miller, the former lottery potential guy who slipped to the second round of the 2012 Draft. They also, through trading Davis, find an excuse to start either Tobias Harris or Andrew Nicholson--a big plus in either guy's development. Dre's contract is only $2 million guaranteed in 2014/15 if the Magic waive him by June 30th, and Arthur's $3.5 million next year isn't too much of a problem. If the Magic waive Andre Miller--in this hypothetical--they would save about $1.2 million in the summer of 2014. It's admittedly not realistic to expect Denver to trade a pick in this scenario.

Detroit's pipe dream of a quick rebuild is basically finished in this scenario. Afflalo slides into the shooting guard spot and Nelson becomes a backup point guard, a role much more suited to his skill set as he ages. This trade still doesn't finish the Pistons' big frontcourt of Josh Smith, Greg Monroe, and Andre Drummond, but it's a step in the right direction with the inevitable spacing that Afflalo would provide.

The Magic get a productive player and expiring contract in Stuckey, who is quietly having a really nice year. They also receive Caldwell-Pope, a big, lengthy guard with deep range and defensive upside. They also receive a 2015 first-round pick, with a protection in place because only the Knicks and Nets don't do that.

I have to admit that finding a landing spot for Davis took about two hours of digging and searching. Every team I brought up either didn't have the contracts to make the trade plausible or would have no use for an undersized, defensive-minded big man, who has black-hole tendencies on offense.

It felt wrong imagining a scenario in which Paul Pierce wastes away playing 18-20 minutes a night on a team that might lose 60 games.

I fiddled with sending Nelson to the Knicks and Nets for a long time, but I didn't really want to help either team and there was no trade that made any sense. I did, however, play around with sending Paul Pierce's huge expiring contract to Orlando for Nelson and money, but it felt wrong imagining a scenario in which Pierce wastes away playing 18-20 minutes a night on a team that might lose 60 games.

Somehow I ended up sending Türkoğlu and Nelson to the Los Angeles Lakers for Pau Gasol's massive expiring contract, but, like Pierce, I didn't want to imagine Gasol wasting away with the Magic. And if he ended up playing nicely in Orlando, the team may win more games than they have any business doing.

Also want to point out how incredibly difficult it is to figure out team's future draft picks. Thank goodness for prosportstransactions.com, but even running through its database became unbelievably meticulous and time-consuming. I don't know what being a general manager is like, but, apparently, it's not as easy as they make it out to be on NBA 2K14. On that game, I'm able to make out like a bandit in every deal, but in good conscience--and for the purpose of keeping this post realistic--I couldn't do that to any of the above teams in any of the aforementioned scenarios.

I hope you guys enjoy these trade possibilities. Feel free to tell me in the comments how much of an idiot I am for trading away half of Orlando's roster.