Luol Deng missed a last-second layup attempt and the Magic skated out of Chicago with a narrow victory.

The Chicago Bulls gave themselves a chance, but Luol Deng's layup attempt with seconds remaining rimmed out as the Orlando Magic pulled out an 83-82 victory against their Eastern Conference foe. Arron Afflalo scored 23 points, collected eight rebounds and dished out four assists in the win.

Deng, despite missing the potentially game-tying bucket, led all scorers with 26 points on 16 shots. He also collected eight rebounds and netted nine of his 12 free-throw attempts.

Orlando trailed by six early, but a Victor Oladipo coast-to-coast bucket through traffic and an Afflalo three-pointer from the right wing capitalized an 11-0 run. That run extended to 15 after Glen Davis knocked down a jumper off a side pick-and-roll and Vucevic finished a close hook over Joakim Noah. Jameer Nelson netted a one footed fadeaway with just under four seconds left to give the Magic a 21-14 lead at the end of the first quarter.

Chicago's offense has been abysmal this season. That it has registered the fourth best defense, via Basketball-Reference, and is still four games under .500 in a weak Eastern Conference is a testament to that offensive incompetence. This was an unmistakable development in the first quarter, as the Bulls scored just 14 points against a pesky-but-undisciplined Magic defense. 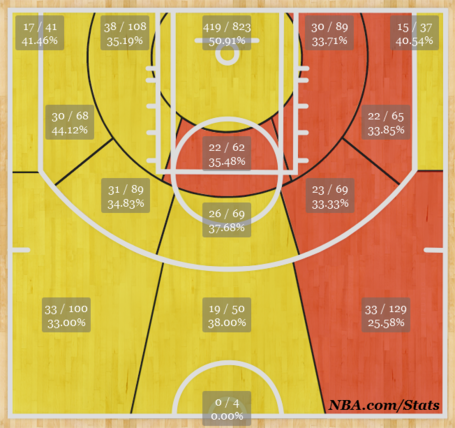 The Magic were more than happy to give up jumpers to the Bulls. On pick-and-rolls, Orlando's big man hedging the screener would sink back to the paint and the on-ball defender would play under, welcoming Bulls ball handlers to take pull up jumpers. As you can see, the Bulls haven't shot the ball well, at all, this season, especially from mid-range.

That bloody mess is a good indicator of Orlando's thought process in defending Bulls shooters and it's why the Magic were generously, and smartly, willing to give up jumpers inside the three-point line.

With the 2nd quarter clock winding down, Oladipo relentlessly attacked Taj Gibson--well-known for his strength and defensive positioning--and flipped the ball in over the interior defender to give the Magic a 43-35 halftime lead.

The Magic lead ballooned to as much as 17 in the third quarter, but those 12 minutes belonged to Afflalo. He was unstoppable, scoring 13 points on 5-of-7 shooting from the field. Each shot he fired was less an attempt at a basket and rather an inevitable torching of the net. If ever there were doubt of his All-Star belonging, this quarter silenced those apprehensions.

Chicago's poor first half shooting picked up in the third quarter as the team knocked down three long-range jumpers. D.J. Augustin found a rolling Taj Gibson, who collected the ball and threw down a thunderous two-handed slam over Vucevic. Afflalo was fouled on a jump shot with 0.8 seconds remaining and knocked down both free throws to give Orlando an eight-point lead heading into the final quarter of play.

Augustin's late three cut Orlando's lead to three-points with a little over a minute remaining. Moments later, Nelson's stumbling lay-up attempt rimmed out, giving Chicago the ball, down three, with just over 20 seconds left. Noah scored a tough, quick left-handed running hook over a well-positioned Vucevic to cut the Magic lead to one. Orlando was able to run around past potential fouling Bulls, wasting over 10 seconds of clock and sending Afflalo--an 88 percent free-throw shooter--to the line.

He missed the first and made the second, giving the Magic a two-point lead, 81-79, with a hair under seven seconds remaining. Bulls coach Tom Thibodeau drew up a beautiful high-post backdoor cut, with Noah placing a brilliant pass to a cutting Deng, but Deng missed the layup attempt and Davis was fouled, hitting both shots to seal the Magic win. Mike Dunleavy hit a three-quarter length shot as time expired, which explains the one-point game.