Orlando Pinstriped Post Mailbag no. 15: Where does Maurice Harkless stand?

The St. John's product isn't playing as many minutes as he did as a rookie. What gives?

Welcome to the first Orlando Pinstriped Post Mailbag of the 2013/14 regular season. This feature has seen a long layoff due to a lack of submissions, but Tyler Lashbrook and I are still committed to answering your Orlando Magic questions when you have them. Please submit yours to OPPMailbag@gmail.com or to the OPP Facebook page.

Have the Magic given up on [Maurice] Harkless as a prospect at this point, or are they just sitting him temporarily, waiting to resume the project at a later time (After trading other players away or after he improves in practice)?

This question is relevant because Harkless has fallen out of coach Jacque Vaughn's rotation: prior to Sunday's game against the Oklahoma City Thunder, in which game he logged 23 minutes off the bench to defend Kevin Durant, Harkless had played 10 minutes or fewer in three of Orlando's previous six games, including his first Did Not Play-Coach's Decision of the season Friday against the Cleveland Cavaliers. That news is especially surprising because the St. John's product started 59 games as a rookie and another 13 times in the 2013/14 season before his role decreased.

"Maurice is still a part of what we're doing. We'll continue to build and we got a long way to go with this." Jacque Vaughn on Maurice Harkless

Vaughn fielded a question not unlike yours, Jay, after Friday's game.

Orlando can afford to take the long view with Harkless, who's only 20 and is quite clearly still developing at the NBA level. Though he had underwhelmed in the season to date, averaging just 7.2 points and 3.3 rebounds per game, Harris' return to health was probably always going to result in reduced minutes for Harkless. 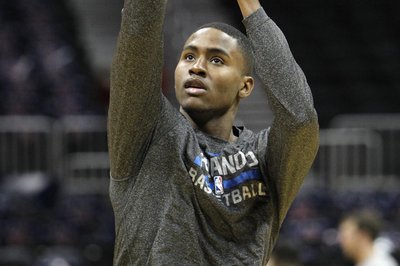 Another issue apart from Harris' health also factors into Harkless' reduced minutes: as I explained this answer in a q-and-a with Fear the Sword, Vaughn has used more three-guard lineups in 2013/14 to help ease defensive pressure on Victor Oladipo. Playing E'Twaun Moore at the nominal small forward spot instead of Harkless gives Orlando another playmaker and initiator. If Harkless were more capable with the ball in his hands, then I think you might see him out there in those situations.

If the Magic trade Arron Afflalo, their starting small forward since Vaughn moved Oladipo to the starting two-guard slot, then more minutes will open up for Harkless. Barring such a deal, it's likely that Harkless will continue to see only situational minutes as Orlando works on the practice floor to make him a more complete player.

Thanks to Jay for his excellent and timely question. Remember, you can submit your questions via email to OPPMailbag@gmail.com or via Facebook on the OPP page.