Magic vs. Cavaliers: Previewing the game with Fear the Sword

Orlando Pinstriped Post chats with Fear the Sword prior to the Magic's showdown with Cleveland on Friday.

Share All sharing options for: Magic vs. Cavaliers: Previewing the game with Fear the Sword

In advance of the Orlando Magic's game against the Cleveland Cavaliers on Friday, Orlando Pinstriped Post hooked up with Conrad Kaczmarek of Fear the Sword, SB Nation's Cavs blog, to preview that night's action and to discuss Cleveland's season in general. Below is our email q-and-a exchange.

Evan Dunlap, Orlando Pinstriped Post: The Cavaliers haven't quite met expectations this season, particularly on offense, where they rank 28th in efficiency, according to NBA.com/stats. Their highest-volume players--Kyrie Irving, Dion Waiters, Andrew Bynum, and Tristan Thompson--all have True Shooting marks below the league average. So my question is, I suppose, what's gone wrong offensively? How can Mike Brown and his players get the team back on track?

The reality of this situation is that it's going to take some time to develop that chemistry and understanding of the game on both ends of the floor.

Conrad Kaczmarek, Fear the Sword: Pretty much everything has gone wrong offensively. The ball movement has been inconsistent and when they do get open shots, they aren't knocking them down. The positive spin on this is that it seems to be getting better. There has been an obvious adjustment period while trying to learn how to play with Andrew Bynum in the lineup. But it's slowly improving.

There's also the problem of this team being a bunch of young players that are trying to learn a new offensive system while learning how to play defense for the first time in their careers. In hindsight, it seems obvious that they would struggle at first. The reality of this situation is that it's going to take some time to develop that chemistry and understanding of the game on both ends of the floor.

OPP: He's only in his second season, but Waiters has already been the subject of trade speculation. What do you make of those rumors? Is it time for Cleveland to cut its losses with the Syracuse product, and if so, what should it seek in return for him?

FtS: I think the rumors are somewhat legit. It's true that Waiters hasn't been a great fit next to Kyrie Irving thus far, but I would argue that the team hasn't really given it much of a chance. They were both injured a lot last year, then the team switched coaches, and now Waiters is coming off the bench and leading the second unit. There's no chemistry between the two of them because the team hasn't given them any time to develop that chemistry in actual NBA games.

You might have guessed by now that I think Waiters has a good deal of upside and that it's worth letting he and Kyrie figure things out together. But if Mike Brown really doesn't think Waiters fits what he's trying to do, then it makes sense to trade him. One possibility would be to simply swap Waiters for Iman Shumpert. Shumpert doesn't create as much off the dribble and is currently a better defender than Waiters (although there's a lot to like about Dion's defensive upside). I don't think the Cavs should trade Waiters now because they'd be selling at his lowest possible value. It sounds like a cop-out, but I really have no idea how much opposing GMs value a guy like Dion. People will point to his inefficiency thus far in his NBA career, but I think you have to think of him as more of a prospect than anything else. Keep in mind that this is a guy who has played just 80 NBA games and is only a few months older than Victor Oladipo.

OPP: After a solid season with the Los Angeles Lakers, free-agent signee Earl Clark is posting only modest numbers in his first year with the Cavs. What did you make of the signing at the time, and how has Clark performed relative to those expectations?

FtS: I thought the signing was decent. It was clear that Mike Brown really wanted him on the Cavs and saw some potential there from his time in Los Angeles. Clark has been whatever. He's shot the three better than people probably expected and he's a big, long defender. He's playing more stretch four for the Cavs than we initially thought he would and that's fine. All in all, Clark's been an okay player this year. Nothing terrible, but nothing to write home about either. 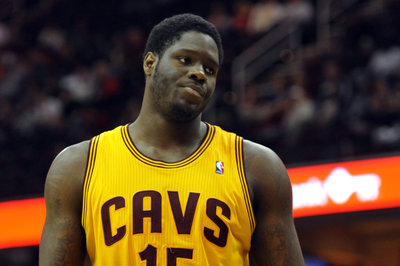 Anthony Bennett has yet to live up to his lofty Draft position.
Photo by David Richard, USA Today Sports

OPP: Just before the Magic picked Victor Oladipo in June, Cleveland selected Anthony Bennett with the first overall pick in the Draft. His struggles are manifold, as he's shooting 23.7 percent from the floor in 10.4 minutes per game. If you can pinpoint it, what is the source of his struggles, and how patient should NBA observers be with his development?

FtS: I think his struggles stem from a lack of confidence. Granted, I haven't talked to the guy since I saw him over the summer, so that's kind of just a guess. But if you watch him on the floor, it's pretty obvious that he's not exactly sure what he wants to do. He's not being the aggressive, dynamic scorer that we saw in college and he's not getting his hands dirty while trying to grab tough rebounds.

I'm not sure if he's just intimidated by the NBA or if he's not fully confident in the health of his surgically repaired shoulder, but something's not right with him. He's also not in great shape right now and that's also a result of missing the entire offseason due to his shoulder surgery. I'm not sure that we're going to see the Anthony Bennett that we expected until much later down the road. He needs a full offseason to get his body right and feel comfortable with his teammates. I tend to be very patient when it comes to young players, so I'm not sure most people will agree with me when I say that Bennett needs several years before we can really judge him. He's 20 years old and has a lot of talent. If you watched him in college, you can see why the Cavs thought he was worthy of a very high draft pick in last year's draft class. That didn't just disappear overnight.

OPP: It's fair to say that Cleveland is having a disappointing year so far, so let's change the tone of the conversation. I'd like to take this opportunity to allow you to discuss something that's gone right for the Cavs, whatever that may be. What are some reasons for optimism?

FtS: They're defending pretty well. The Cavs are 15th in defensive efficiency according to NBA.com/stats after being 27th a season ago. Mike Brown has certainly made an impact on that end of the floor. The fact that Andrew Bynum is playing is encouraging. Nobody thought we'd see anything out of him this year but here he is. He's still rusty and probably won't ever be the player that he used to be, but there's a lot of potential there. There's also this kid named Kyrie Irving. He's been worse than expected this year, but I don't expect that to last for very long. He's not a 32% shooter from three and I have a hard time believing that he suddenly lost his ability to be a super efficient scorer. As Kyrie gets better, the Cavs' offense will get better.

The Cavs are slowly getting better. They've won 4 of their last 5 games and are 7-3 at home. The problem is that they're 1-10 on the road. In order for us to believe that they're actually turning a corner, they need to beat the Magic on the road.

Thanks to Conrad for his time, attention, and insight. Visit Fear the Sword for the great Cavaliers coverage he and his staff put together.