Magic at Bobcats: Previewing the game with Rufus on Fire

Orlando Pinstriped Post and Rufus on Fire team up in this e-mail preview.

Share All sharing options for: Magic at Bobcats: Previewing the game with Rufus on Fire

In order to get a grasp of the Charlotte Bobcats as a team in advance of their game against the Orlando Magic on Wednesday, Orlando Pinstriped Post contacted Chris Barnewell of SB Nation's Rufus on Fire. Chris is an avid Magic fan who happens to write a lot about the Bobcats, so we had to ask him a little about Orlando's season as well. If you have a Twitter, I suggest following Chris. He won't disappoint.

Tyler Lashbook, Orlando Pinstriped Post: Charlotte has been a bit of a surprise story in the NBA. At 10-11, the Bobcats are right in the middle of a playoff hunt and through a month and a half they're the sixth seed in the East. Is this type of play sustainable over the long haul?

Chris Barnewell, Rufus on Fire: I'm pretty sure we can expect the Bobcats to play competitive the way they've been for the entire season. There will rarely be a game we see the Bobcats in and say, "Wow they are getting a beat down." Most of the time we'll be saying that the Cats are right in this game. I think the bigger issue will be when teams finally start to put it together and when the east balances out. I mean, the East can't be this bad forever right?

OPP: That defense has been fantastic. They're third in the entire NBA, via Basketball-Reference, after back-to-back seasons as the league's Swiss cheese. What do you make of it?

The Cats are forcing midrange shots, they're rotating well, they're communicating, and they're keeping themselves in games.

The Cats are forcing midrange shots, they're rotating well, they're communicating, and they're keeping themselves in games. Even players who are historically not the best defenders (Oh hi, Al Jefferson) have been okay on defense this season. You have to give all the credit to Clifford.

OPP: The 2014 Draft, as you know, is heralded as a loaded prospect class and one of the best classes of the past decade. It just so happens that this is the year that Charlotte looks like it could make a push for the playoffs. What's the feeling like among fans? I can't imagine they'd want to spend another year in the lottery, but you never know.

RoF: I think while fans are a little disappointed they might not be getting a chance at an Andrew Wiggins or a Jabari Parker, they just don't seem to mind too much. This franchise has been labeled losers. Dysfunctional. A joke. I mean, if they beat the Magic tonight, they'll be over .500 in December for the first time in FRANCHISE HISTORY.

The fans just want a little bit of something to hang their hats on. They want a winning culture. So while they might miss out on a high lottery pick this year, I think they'll take the tradeoff. Also, with the luck the team has had in the draft the last few years, can you blame them? 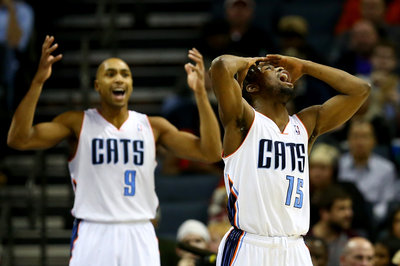 OPP: Is Kemba Walker making that next step? I've watched three or four Bobcats games this year and I've been impressed with the guy. Then I look at his stats and see that he's still shooting below 40 percent from the floor. I caught the good games, didn't I?

RoF: No, you're right, Kemba Walker is having a good year. As far as the next step, I think he took that step last year and this year's early season trends say he'll probably tread water this year. He's attacking the rim, he's making passes, he's doing exactly what he's done since he came into the NBA. He's carrying the offense.

The only problem is this happens to be a season where his shooting isn't going over well. He's not really forcing shots, he's just not making them. Ben Swanson actually wrote a post on his rough shooting start to the season that you should really check out. Walker is an awesome player, but he's not at a level where he can carry an entire team that can't shoot... and this entire team can't shoot. There's not a single dead-eye on the team; well, maybe Ben Gordon, but he guns so much it doesn't matter.

OPP: You're a Magic fan: there's some unhappy chirping among fans about the job Jacque Vaughn is doing in his second season with his odd rotations. What say you?

RoF: I say that my patience is running thin. There's something to be said for a coach who's willing to try new lineups and rotations but there's another for one who doesn't seem to allow players to go into a role. I said before the season that the important thing for this season was to find out which of the Magic young players are going to be kept long term and which will be trade bait. Well we can't see that if the rotations have no consistency.

Some Magic fans are mad he's not playing Kyle O'Quinn, others are annoyed that Doron Lamb isn't getting any run despite both being very young players. These are fine issues, but mine is just the lack of consistency and how sometimes Vaughn forgets he even has a bench. It's okay to tell young players, "You need to earn your minutes," which is why I'm not going to complain if a young guy doesn't play a lot. I will complain if you give a player 20 minutes one night, 30 the next, and a DNP-CD the night after that for no particular reason other than to play Jason Maxiell those minutes instead.

Speaking of veterans getting major minutes, these veterans are not on a winning team and as a result Glen Davis and Arron Afflalo should NEVER play 50 minutes. I don't care how many OT's there are, if you have NBA-level players on the bench who haven't even broken 10 minutes and you play the veterans 50 minutes, I'm going to be furious that you're sacrificing a veteran player's health for a game in DECEMBER.

OPP: Most observers would say that Orlando is better set up for the future, but Charlotte doesn't look too bad. Is it closer than people think? What are the major differences moving forward?

RoF: The only reason people think Orlando is better set up for the future is because they have a lot of nice pieces that look very nice. But those pieces don't work perfectly together right now and there are still a ton of questions with this team. Half the roster could be gone tomorrow.

The Bobcats appear to have a core they want to build around and are more prepared for the future because they've been rebuilding. Now I'm not going to say one team is rebuilding correctly and one isn't. We aren't really going to know who did a better job until 3-4 years from now and we see how both teams look. At the moment though you can't really complain about either.

Thanks to Chris for chatting hoops with us. Visit Rufus on Fire for complete Bobcats coverage and follow Chris on Twitter.

Magic at Bobcats: Will skid stop in Charlotte?