A look at the Magic through one-quarter of the schedule

The Magic are roughly 25 percent through their schedule. Orlando Pinstriped Post takes a look at the season so far.

Share All sharing options for: A look at the Magic through one-quarter of the schedule

The Orlando Magic played the 21st game of their season Monday, meaning that about 25 percent of their schedule is in the books. Now's a great time to look at some key Magic stories from the season so far, and that's what we endeavor to do in this post.

You probably can't name two guards in the Eastern Conference playing better ball than Arron Afflalo through the first quarter of the season. In his eighth year, Afflalo is one of six players in the entire league through Tuesday averaging at least 21 points, four rebounds, and four assists per game. He's posting those numbers with great efficiency, as he owns a True Shooting mark of 60 percent. LeBron James and Kevin Durant are the only players matching that level of per-game production while exceeding Afflalo's True Shooting mark. 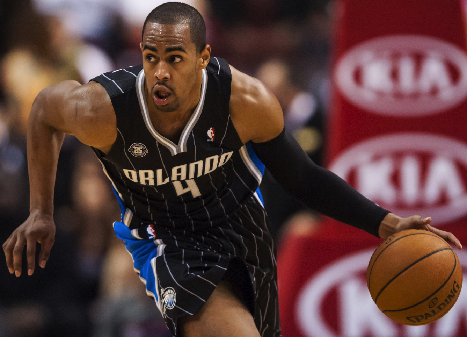 Arron Afflalo finds himself in some elite company in the season's early going.
Photo by Howard Smith, USA Today Sports

In Orlando's last three games, he's shown some signs of fatigue, shooting just 39.6 percent from the floor. Overall, Afflalo has played brilliantly on both ends of the floor, and it's not hard to imagine the league's coaches selecting him to the All-Star team in February, even when one considers how poor the Magic's record will likely be at that juncture. He's also a strong candidate for the league's Most Improved Player award, given that he has actually added elements to his game--particularly playmaking off the dribble--to make himself more well-rounded; his uptick in production is due to actual improvements, and not simply an increase in playing time or role.

Afflalo's name will certainly be one to watch as the NBA's trade season picks up in earnest after December 15th, at which point most players signed to free-agent contracts over the summer become trade-eligible. Though it's true that his trade value has never been higher, it's also true that the Magic do not necessarily have to trade him: his contract is worth a team-friendly $15 million over the next two seasons, according to ShamSports.

Afflalo's emergence has, to a degree, overshadowed how well Nik Vučević has played in his second year with the Magic. The 23-year-old Montenegrin has averaged 14.7 points, 10.9 rebounds, 2.5 assists, and 2.2 combined steals and blocks so far. But his productivity extends beyond traditional counting stats; digging a little bit deeper shows that he's made real improvements in more subtler ways.

The most promising development is that he's learned to draw fouls. Vučević is averaging one free-throw attempt for every four field goal attempts in 2013/14, and that uptick in contact-creating has resulted in a True Shooting mark of 57.7 percent, his first time exceeding league-average in that category.

In his first year with the Magic, Vučević averaged one free-throw attempt for roughly every seven field goals he tried. That rate might be acceptable for a jump-shooting specialist, but it's nowhere near acceptable for a seven-footer who plays inside and rebounds like mad.

The Magic get 51.4 percent of available boards with Vučević on the floor, but just 44.9 percent with him on the bench.

And regarding that second point, Vučević's recent absence due to a sprained ankle--he's missed Orlando's last four games--has highlighted what his presence means for the team on the glass. In that four-game stretch, Orlando has grabbed just 40.2 percent of all available rebounds, according to NBA.com. Taking a wider view, the Magic get 51.4 percent of available boards with Vučević on the floor, but just 44.9 percent with him on the bench.

Vučević's ability to operate out of the high post, where he excels as a passer--his assist rate has improved from 9.3 to 13.3--and safety-valve jump-shooter, suggests that he could shift to power forward if Orlando were to acquire a strong, back-to-basket center.

Through 21 games, it's clear that no players mean more to Orlando than Afflalo and Vučević. Both could be part of the next great Magic team.

The Magic turned heads over the summer when they indicated they planned to play Victor Oladipo, coming off a successful three-year career as a shooting guard for Indiana, at point guard in his rookie season. The skills which made Oladipo an efficient offensive player in his junior year at Bloomington--the off-ball movement, the occasional spot-up three--would go out the window as he learned the sport's most complicated and important offensive position.

A highlight waiting to happen 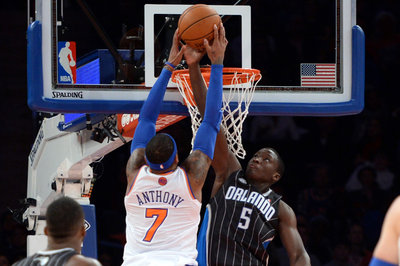 Check out some of Victor Oladipo's best plays in a Magic uniform:
• Fastbreak Eurostep
• 360-degree slam against Brooklyn
• Dunking on two Hawks
• Rejecting Carmelo Anthony
All of Orlando Pinstriped Post's videos are available on this page.
Photo by Joe Camporeale, USA Today Sports

To date, he doesn't quite look like a point guard, not that we ought to have expected otherwise: Oladipo has 74 assists to 77 turnovers, with a Pure Point Rating of -4.25 which figure is more in line with that of a black hole of a big man. At 49.7 percent True Shooting, he's not exactly setting the league ablaze with his facility as a scorer either.

The primary function of a point guard is to create high-value shots, either for teammates or for himself. Oladipo hasn't managed to do either, although there's certainly reason to believe he'll improve: apart from the natural progression that ballplayers make with age and experience, there's the simple fact that Oladipo can get to the rim. He doesn't always get there with ease, but he can get there: the next step is learning how to finish in traffic against defenders with NBA-level size and skill.

And then there's the passing: Oladipo looks to be most comfortable, so far, with dishing to bigs for long twos in pick-and-pop action. That's fine, and being able to make that pass is important for playmakers at this level. It also leads to the game's least efficient shot, namely the long two-pointer. In the 61 games ahead, Oladipo will need to make more progress in finding teammates for baskets near the rim or beyond the arc.

Oladipo will probably never be a full-time point guard, and it's useful here to remember what Magic assistant coach James Borrego said about Oladipo after the Orlando Pro Summer League: "I think he handled himself well at the one, but I don't think that necessarily makes him our future one." He projects as a slashing two-guard with some facility making plays by getting to the rim.

Magic coach Jacque Vaughn hasn't quite found a winning fivesome of players to date. According to NBA.com/stats, the Magic's most-used five-man unit has played 138 minutes together across 10 games. That group is Jameer Nelson, Afflalo, Maurice Harkless, Jason Maxiell, and Vučević, and started the first 10 games of Orlando's season.

That same fivesome hasn't played since.

Only two other fivesomes have played more than 48 minutes together, and neither of those groups has appeared in more than four games total. In fact, the opening-night starters comprise the only Magic fivesome that's appeared in at least 10 games.

Once Vučević and Tobias Harris return to health, Vaughn's playing rotations should stabilize.