If Orlando wins the 2014 NBA Draft Lottery, would it use the pick on the Oklahoma State sophomore? One ESPN analyst believes it's possible.

In a story Monday looking at possible outcomes for the 2014 NBA Draft Lottery, ESPN Insider Chad Ford examines which player each team might select if it were to win the top overall selection in the most-hyped Draft since 2007. Through Monday's games, the Orlando Magic have the league's fourth-worst record and own the league's longest losing streak. Given those facts, as well as the general truth that Orlando is more focused on the long-term than the present, it's fair to speculate about how it might behave around Draft time. 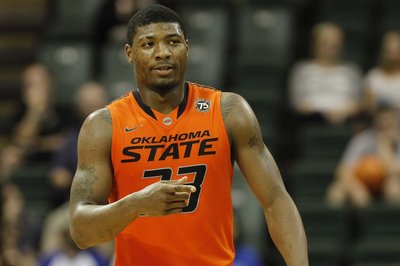 Sam Vecenie and Tyler Lashbrook discuss Smart's strengths, weaknesses, and how he might fit with the Magic.

Ford believes that the Magic would have selected Oklahoma State Cowboys guard Marcus Smart in 2013 if he had declared, but he made the surprising choice to stay for a sophomore season. Ford is "inclined" to believe the Magic would pick Smart with the first overall pick in 2014, but there is a catch.

"[S]ources in Orlando say they are bullish that Victor Oladipo could be a point guard in the NBA," Ford writes, "and his success could free them to take a player with more upside, such as Andrew Wiggins."

Through nine games, Smart is averaging 19.7 points, 4.9 rebounds, 3.8 assists, and 2.9 steals for the Cowboys. He's improved his field-goal percentage from 40.4 percent as a freshman to 46.3 percent as a sophomore. There's no question that he and Oladipo would give the Magic an enviable, and exciting, combination of size and athleticism at the guard spots.

Oladipo's play at point guard has been spotty at best, however: the converted two-guard is averaging 3.5 assists and 3.7 turnovers per game in his first professional season. If Orlando isn't convinced that he's a long-term solution at the point, then it could try to take another playmaker in June.

What do you think the Magic should do if they win the Draft Lottery? Please vote in the poll embedded in this post.